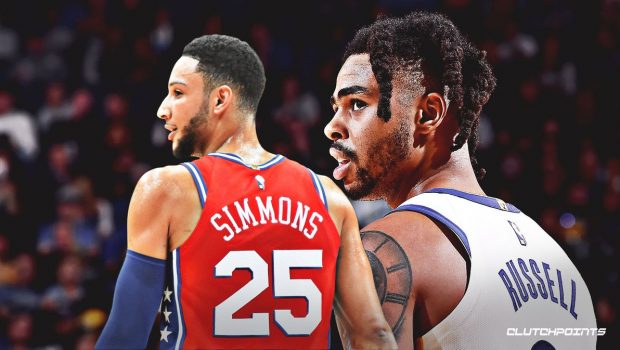 Some rumors that circulate on the Internet are premature facts and some are wild-ass rumors floated by a lazy reporter who has nothing better to do with his time.

Consider a prospective trade between the Sixers and the Golden State Warriors — Benny Simmons for D’Angelo Russell!

That has no chance of happening, but according to Marcus Thompson II, who covers the woeful Warriors for The Athletic, it’s worth considering:

Both Russell and Simmons are eligible to be traded after signing contracts this past offseason:

One of the interesting possibilities I’ve heard being kicked around is Russell for Philadelphia’s Ben Simmons. The 76ers could use a point guard who can score and run the show — and shoot. Some believe the pairing of Simmons and big man Joel Embiid isn’t viable in their pursuit of a championship. Simmons, as one source told me, is probably the best player the Warriors could possibly get for Russell, just considering the needs of the Warriors and their potential trade partners.

However, Thompson also reports that there are people in the Warriors organization who believe Ben Simmons wouldn’t be a good fit next to Draymond Green because of those two players’ lack of shooting prowess. While the presence of Stephen Curry and Klay Thompson would help mitigate this, there would still be some concerns. The Sixers would probably win that trade since they need a guard who can shoot and space the floor like D’Angelo Russell next to Joel Embiid and Tobias Harris.

Simmons signed a five-year, $170 million extension with the Sixers, while Russell got a four-year, $117 million contract from Golden State as part of a sign-and-trade deal with the Brooklyn Nets involving Kevin Durant.

The NBA trade deadline is on Feb. 6. It would be a surprise if the Dubs and Sixers end up pulling off this blockbuster deal before then, but this is something that shouldn’t be ruled out if Philly falls short again. There has been some drama around the Sixers, and they may look to make some drastic changes if they fail.