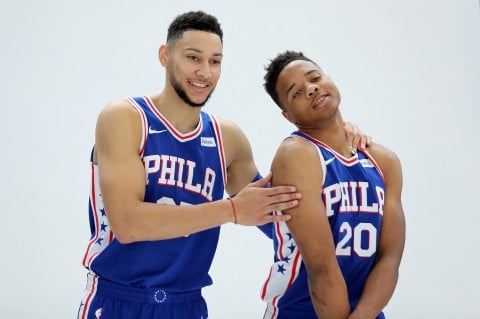 THESE SIXERS HAVE BECOME AN ON-DEMAND STUBHUB SUPERSTAR!

The whole town is talking about the Sixers, who tip off the 2017-18 season tonight against the Wiz in Washington.

No, they are not hotter than the Eagles, who have risen to No. 2 in the NFL power rankings, and who will always own this town, the NFL being America’s Secular Religion.

But the anticipation about these Sixers, with Joel Embiid, Ben Simmons, Dario Saric, Markelle Fultz and JJ Redick has Twitter feeds on fire!

And that has made them an on-demand NBA tix leader:

But No. 4 is the Sixers’ home opener against the Celtics on Friday night and No. 5 is the team’s matchup against the Warriors on Nov. 18. A little behind that is a Christmas Day matchup at the New York Knicks at No. 7.

Three of the top four in-demand games in the Eastern Conference are Cavaliers-Celtics, which makes perfect sense.

But Celtics-Sixers on Friday night is No. 2 in the East. Part of it is the curiosity around the game.

Plus, it’s the Sixers home opener. The last time Embiid was on the court at the Wells Fargo Center, he scored 32 points in a five-point loss to the Houston Rockets on Jan. 27. His return has been long-awaited.

According to StubHub, the Sixers sold the 16th-most tickets on StubHub in 2014 before bumping up to No. 13 in 2015. With a healthy Embiid last season and some other talented young pieces, the Sixers shot up to No. 5 last season. That’s where they are now, trailing the Lakers, Knicks, Celtics and Warriors and checking in ahead of the Cavaliers, Toronto Raptors, Los Angeles Clippers, Brooklyn Nets and Washington Wizards.