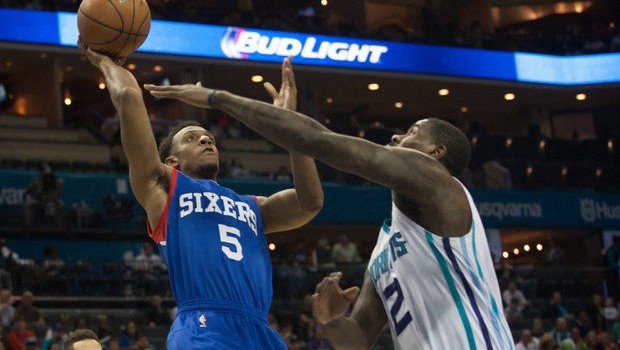 The Sixers lost a one-point game to the Charlotte Hornets Saturday night, and it was the kind of game they will win next season, if only because of their increasing experience.

But Gerald Henderson’s driving layup with 6 seconds left lifted the Hornets to a 92-91 win over the Sixers.

Kemba Walker had 24 points and Mo Williams added 18 as the Hornets won despite playing without three starters, including center Al Jefferson.

Henderson, a Philly native, struggled all night, missing 10 of his first 12 shots. But with the game on the line, he took an inbounds pass from midcourt, drove past Ish Smith and put up a right-handed layup over the leaping Furkan Aldemir for the lead.

Smith (photo above) had a chance to win it for the 76ers, but his driving left-handed layup at the buzzer was too strong.

The Hornets overcame a 1-of-13 shooting night from beyond the arc to avenge a costly 19-point loss to the Indiana Pacers on Friday night.

Smith and Robert Covington each had 15 points for the 76ers, who’ve lost 19 of their last 20 games on the road.

With the 76ers leading by one, Smith missed a 3-pointer from the right corner with 25 seconds left that would have made it a two-possession game.

The Hornets got the rebound, but after a timeout, Williams missed an open look from the right corner with 17 seconds left. The Hornets fouled Smith, who missed both free throws with 10.6 seconds left giving Henderson and the Hornets one last opportunity.

With Jefferson out, rookie Noah Vonleh saw more action in the middle and had a one-handed dunk over Nerlens Noel. He finished with six points and six minutes.

Noel suffered a cut on his right eyelid in the second quarter and did not return to the game.

Noel had been playing well for the 76ers with six double-doubles in his last eight games. He finished with two points and two rebounds in 10 minutes.