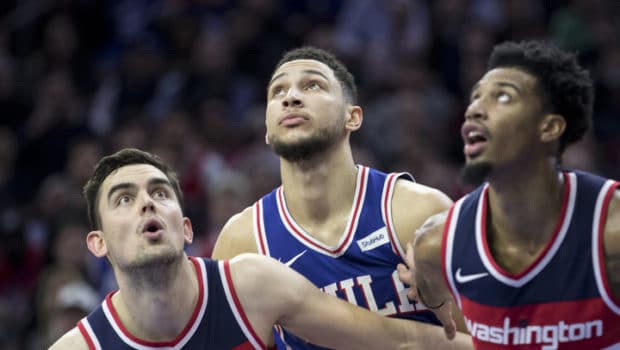 Down 24 points to the Sixers last night at the Wells, Brooks benched most of his starters and then installed a employed a strategy of fouling Ben Simmons in the fourth quarter that turned the game into a free throw shooting contest before losing 118-113.

“The message is you’ve got to play hard. I’m a simple coach,” Brooks said. “You play hard. You play for your teammates. If you don’t do that, I’ve got to figure out who will.”

Asked whether he felt intentionally fouling an opponent “is good for the game” — with NBA Commissioner Adam Silver in attendance to boot — Brooks shot back: “It’s not my rule. It’s an NBA rule.”

Simmons made 12 free throws in the fourth quarter, but he propped up his percentage late when he hit six straight. Other than that, Simmons was shaky, and the final quarter dragged. Still, the Wizards scored 48 points — the most for the franchise in more than 32 years, according to Elias Sports Bureau — and trimmed the lead to three points in the final minute.

Still, the bench’s efforts could not overcome the play of of Simmons, Joel Embiid and Dario Saric.

Before Embiid fouled out, he dominated the Wizards with 25 points, 14 rebounds and four blocks. Simmons had a game-high 31 points, 18 rebounds and four assists. And Saric contributed 24 points as Philly (12-8) looked as talented and deep as advertised.