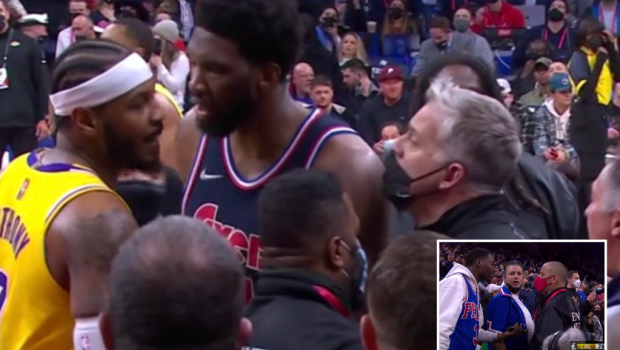 ESPN is reporting that the Sixers have indefinitely banned the fan who taunted Lakers forward Carmelo Anthony Thursday from Sixers games and all future events at Wells Fargo Center.

Anthony confronted the fan standing behind the row of courtside seats near center court midway through the fourth quarter of Philadelphia’s 105-87 win over the Lakers after Anthony said the fan repeatedly referred to him as “boy.”

The fan was summarily ejected after the incident caused game action to pause for several minutes while the referees attempted to restore order and guide Anthony away from him.

An investigation conducted in the 24 hours since the game found that the individual, who was not identified by the team, was a repeat violator of the Sixers’ fan code of conduct, a source familiar with the situation told ESPN.

He had previously been warned and disciplined for those offenses. The individual is not currently a Sixers season ticket holder.

Mike Murphy, one of two Philadelphia fans who were tossed from the 76ers-Lakers game on Thursday for taunting Los Angeles veteran forward Carmelo Anthony, was banned indefinitely from all future 76ers games at the Wells Fargo Center.

After the game, Anthony confirmed Yahoo Sports’s report that the fans were calling him “boy” constantly throughout the game, according to Los Angeles Times Lakers beat writer Dan Woike.

According to Keith Pompey of The Philadelphia Inquirer, Murphy joined the Angelo Cataldi and the Morning Team show on SportsRadio 94WIP in Philadelphia on Friday and said his comments toward Anthony were not meant to be racist.

“He comes down the court,” Murphy said about Anthony on the radio staton. “We’re blowing [them] out in the game. I say to him, ‘You’re a little boy. Let him shoot. Let him shoot.’ He looked at me. He smiles. I think he goes down to the other end of the court. He comes back down … and I say, ‘Let him shoot. He’s a little boy.’ And he lost his cool out of nowhere.”