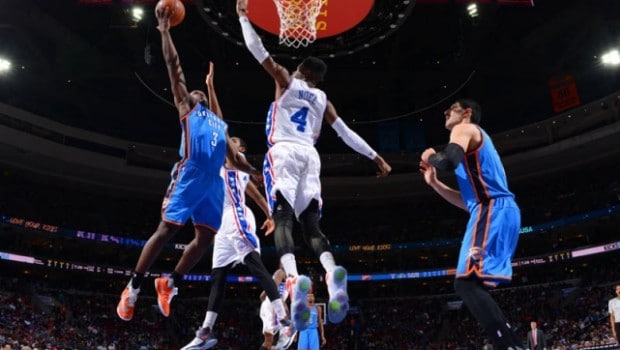 The Sixers’ last game in this awful season is finally upon us.

That the Chicago Bulls are also missing the playoffs is a much bigger surprise given the club had made seven straight trips and won 50 games a year ago before losing a tight series in the Eastern Conference semifinals.

These teams are disappointing for far different reasons and the Bulls seek their 10th straight win in this series tonight at home to close the season.

The Sixers’ wretched three-year run with Sam Hinkie’s imprint on the team will come to a merciful end. He quit last Wednesday after running an analytics-minded front office and stripping the organization of all major talent with the idea of bottoming out in the standings and acquiring lottery picks. A loss Wednesday will make this season’s edition the second-worst team in NBA history to the 1972-73 Sixers club that went 9-73.

While the 76ers (10-71) are badly in need of a new direction, the road forward for Chicago is less clear. The Bulls (41-40) fired popular coach Tom Thibodeau and brought in Fred Hoiberg before 2015-16 to guide a squad considered a leading contender in the East after a six-game loss to Cleveland in last year’s playoffs.

Instead a season full of turmoil has ensued that saw star guardJimmy Butler criticize Hoiberg in December while injuries toJoakim Noah and Derrick Rose hampered the club’s rotation.

Rose and Pau Gasol opted to sit out the final two games once the Bulls were eliminated, and that decision caused controversy when Butler played through a sore knee Monday and had 23 points and 11 assists in a 121-116 victory at New Orleans.

”I don’t want anyone to think I’m quitting on my team,” Butler said. ”I love this game and I’m fortunate to play every day. I don’t care if we’re in the playoffs or out of the playoffs. I don’t like to lose, period. I play to win.”

Butler, who had a career-high 53 points in a 115-111 overtime win in Philly on Jan. 14 in the last meeting, later clarified that his comment didn’t mean that he thought Rose and Gasol had quit for the last two games.

Rookie Cristiano Felicio, who has totaled 32 points on 13-of-15 shooting in his last two games, will get major minutes in this contest. So will Bobby Portis and Justin Holiday, who combined for 27 points Monday.

The word quit is what the 76ers used to describe how Hinkie parted ways, although the club was clearly headed in a different direction once Jerry Colangelo was named chairman of basketball operations Dec. 7. That move came in the wake of an embarrassing stretch for the organization when star rookie Jahlil Okafor was attached to a string of off-court incidents that included reckless driving and a fight in Boston.

Colangelo helped bring in veteran players like retiring center Elton Brand, who will play his final game tonight if he gets into this contest. Brand, the No. 1 overall pick by the Bulls in 1999, sat out Tuesday’s 122-98 defeat to Toronto.

Robert Covington, who grew up outside Chicago, is averaging 24.3 points in his last three games and scored 25 in the last meeting.