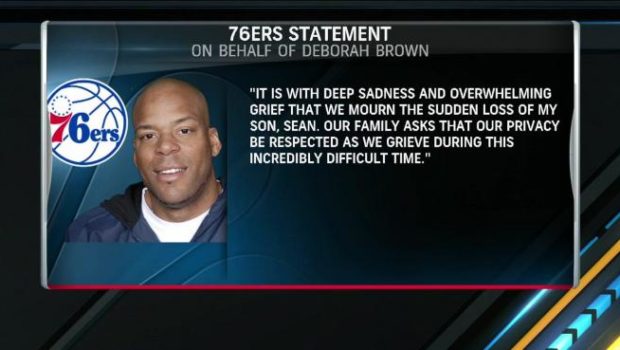 Hours after interviewing for an assistant coaching job with the New York Knicks yesterday, former NBA center Sean Rooks collapsed and died in a Philly restaurant.

Rooks had been a player-development coach for the past two years with the Sixers.

“It is with deep sadness and overwhelming grief that we mourn the sudden loss of my son, Sean,” his mother, Deborah Brown, said in a statement released by the 76ers on Tuesday night. “Our family asks that our privacy be respected as we grieve during this incredibly difficult time.”

Rooks, 46, had traveled to New York and back on the train yesterday, meeting with Knicks coach Jeff Hornacek, general manager Steve Mills and president Phil Jackson about becoming an assistant coach.

Rooks and Knicks officials had departed the meeting enthusiastic that Rooks might join Hornacek’s staff and that an agreement could be reached soon, league sources said.

Rooks had gone to dinner in Philly after returning from his trip to New York. He had been preparing to leave today for an NBA-sponsored trip to China.

Rooks had a 12-year NBA career, including stops with the Dallas Mavericks, Minnesota Timberwolves, Atlanta Hawks, the Los Angeles Lakers, Clippers, New Orleans and Orlando Magic. After an honorable mention All-America career at the University of Arizona, Rooks was the 30th overall pick in the 1992 NBA draft.

As a coach, Rooks had been diligent in starting at the bottom of the pro basketball profession and working his way up. He spent five years in the D-League, including stops in Sioux Falls and Bakersfield, before landing a player-development job with the 76ers in 2014.