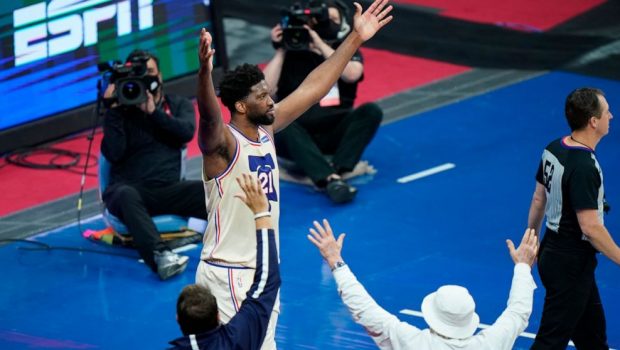 SIXERS ARE NO. 1 TEAM IN THE NBA, ACCORDING TO NBA.COM!

The last week of the NBA’s regular season is kicking off, and NBA.com ranks the Sixers No. 1:

Things appear to be wide open in both conferences, but the Sixers are heading toward the playoffs looking very much like a legit No. 1 seed. They’ve won eight straight games, having held their opponents to just 101.4 points per 100 possessions over the streak. Philly is now 26-4 (15-0 at home) when it’s had its full starting lineup, with the only loss to an Eastern Conference opponent having come in Tampa on Feb. 21, when the starting lineup was a +21 in its 15.4 minutes and the Sixers were outscored by 28 points otherwise.

It will be interesting to see if Doc Rivers staggers the minutes of his starters in the playoffs more than he has in the regular season. The 20.7 minutes per game that the group has averaged is, by a healthy margin, the most for any lineup that’s played at least 10 games together and nine more minutes per game than last season’s starting lineup averaged (11.7) under super-staggerer Brett Brown.

Whether they finish first or second, this will be the highest-ranked defense that the Sixers have had in the 25 seasons for which we have play-by-play data. The offense will finish outside the top 10, but has scored 117.9 points per 100 possessions with Joel Embiid on the floor. That’s the fourth-highest mark (behind those of the Nets’ three stars) among Eastern Conference players who’ve averaged at least 15 minutes.