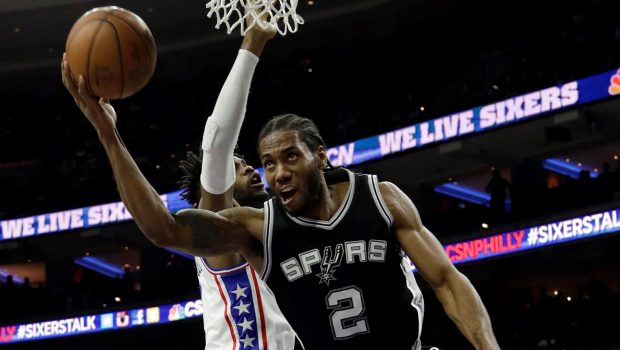 SIXERS ARE THE EAST COAST APPLE OF KAWHI LEONARD’S EYE!

NBA free agency is now nine days old, but the Sixers’ big play this offseason is still in a possible trade for a star:

Kawhi Leonard has had enough with the San Antonio Spurs and is reportedly interested in a move to his hometown of Los Angeles.

While the Lakers initially were deemed Leonard’s top choice, the 27-year-old reportedly now has his eyes set on the Clippers in the wake of LeBron James agreeing to join the Lakers.

The Spurs ultimately hold the cards, as Leonard has one year remaining on his current contract.

And if San Antonio decides to ship Leonard out of the Western Conference, the two-time NBA All-Star reportedly hopes it’s to one team and one team only.

“I want to add clarity to that,” said ESPN’s Chris Haynes said during an appearance on “The Jump.”

“Los Angeles are his preferred destinations. He will consider Philly. That’s the only Eastern Conference team he would consider if they’re able to put a package together.”

The 76ers reportedly are one of a handful of teams that have had trade talks with the Spurs about Leonard.

Given the Sixers’ young talent and future assets, it comes as no surprise that San Antonio allegedly asked for a massive return in exchange for its two-way star.

While Leonard is an elite player, his injury history and impending free agency makes a deal for him a major risk. Although the Spurs might try to accommodate Leonard as best they can, they likely wou