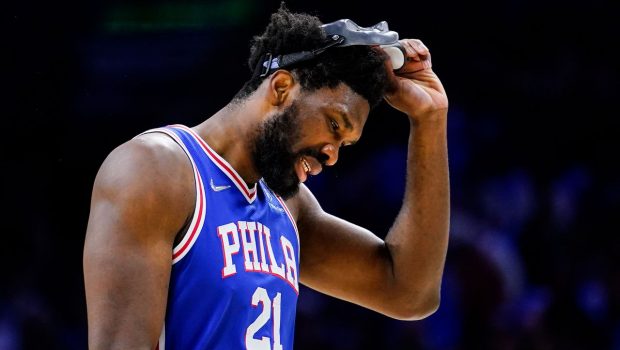 SIXERS ARE OUT $50K FOR ‘FAILING TO DISCLOSE’ JOJO’S STATUS — BFD!

The Sixers have been fined $50,000 by the NBA for violating league injury reporting rules for their handling of Joel Embiid in the lead-up to the club’s 99-79 Game 3 victory over the Miami Heat Friday.

The NBA said the 76ers “failed to disclose center-forward Joel Embiid’s participation status in an accurate and timely manner.”

Embiid was listed as out for Friday’s game as late as noon Friday — even after being cleared from the NBA’s concussion protocol and participating in the 76ers’ morning shootaround.

Then, at 12:30 p.m., Embiid was upgraded to doubtful — which he remained until he was named as part of the starting lineup about a half-hour before the game tipped off.

Embiid, who had missed the first two games of the series with a facial fracture and concussion he suffered when he was hit in the face with a Pascal Siakam elbow in Game 6 of the team’s first-round series with the Toronto Raptors, finished with 18 points and 11 rebounds in 36 minutes in Philadelphia’s win, which saw the Sixers climb back to within 2-1 in the best-of-seven series.