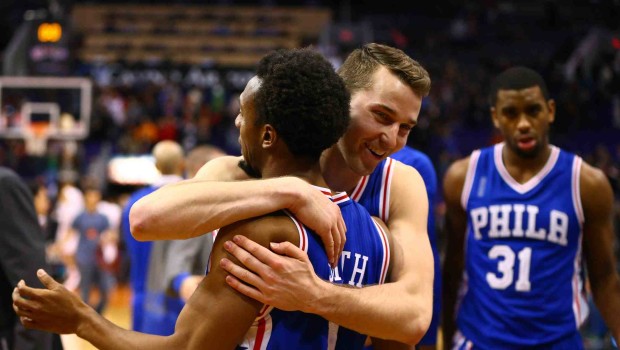 SIXERS ARE BACK HOME TONIGHT WITH ISH AND SOME SWAGGER!

It only feels as if the Sixers have been on the road for a month.

They begin a six-game home stand tonight against the Minnesota Timberwolves, hoping to win their fourth game of the season.

The Sixers closed a 2-4 trip with back-to-back losses in Los Angeles, including one to the Western Conference-worst Lakers – whom they beat last month to end a 28-game losing streak which was the longest in major American pro sports history. They then fell to the Clippers on Saturday by allowing a season-high point total in a 130-99 loss.

Ish Smith, reacquired from New Orleans on Dec. 24 after playing 25 games for the Sixers last season, shot a combined 5 for 28 with 13 points and 13 assists in the two games at Staples Center after averaging 18.0 and 8.3 while leading Philly to a pair of wins in his first three games back.

“We really made new strides on this trip,” said rookie Jahlil Okafor, who missed Smith’s first two games with knee soreness. “We won two games and we have Ish Smith here now. He’s a new piece to this team and we’re all really excited about it.”

Nerlens Noel has benefited the most from the addition of Smith. The second-year big man’s shooting percentage has skyrocketed from 45.0 percent in 25 games without Smith to 70.8 percent over the past five games. Noel is averaging 16.0 points with Smith in the lineup compared to 9.8 before he arrived.

Beyond the boon to his own numbers, Noel said the Sixers feel like a different team with Smith in the lineup.

“We played with a little more of a swagger in these games and we’re figuring some things out,” Noel said after he had 13 points and eight rebounds against the Clippers.

Okafor’s numbers have declined with Smith in the lineup, but he scored 23 points in 18 minutes off the bench to lead the Sixers on Saturday.

The Timberwolves (12-22) are coming off a 95-85 loss to Milwaukee on Saturday. They led by 17 points eight minutes in, holding the Bucks without a field goal for longer than that, but later trailed by as many as 15 down the stretch.

Minnesota coach Sam Mitchell left his young players on the court “hoping a little embarrassment set in on how they were playing.”

Point guard Ricky Rubio, who had 14 points and played 7 1/2 minutes in the fourth, said his team “played too cool” and wasn’t as aggressive as it should have been.

“This is a league built for men,” Rubio said. “We weren’t men tonight.”

The Wolves lost for the sixth time in seven games and fell to 5-13 at home. They have lost their last three on the road and are 7-9 outside Minneapolis.

Minnesota beat the Sixers 100-95 on Nov. 23 for its first home win of the season after losing both meetings last season. The loss dropped the Sixers to 0-15, part of their historic losing streak dating to last season.

The Sixers have won five of the past seven meetings with Minnesota in Philadelphia.