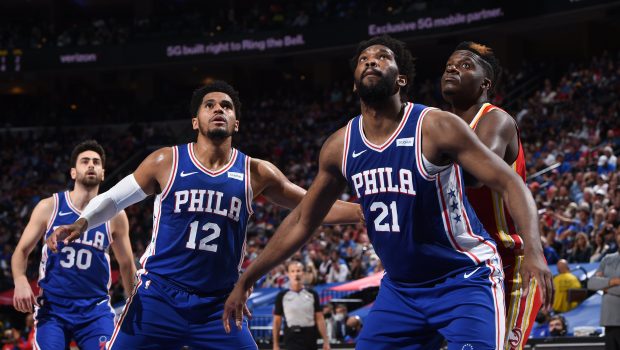 With the NBA season due to start in the coming weeks, teams are starting to round into shape and we’re getting a clearer picture of what to expect from some of the top teams in the league.

It’s the perfect time to take advantage of the futures markets on the web’s top basketball sportsbooks.

With the Sixers in preseason turmoil caused by a certain young socialite’s holdout, now may be the time to take advantage of Vegas’ projections for the Sixers this season.

Let’s take a look at some bookmakers’ projections for the Sixers this year. (odds via BetMGM)

After winning 49 games in a shortened season, this may seem a little low. But a disappointing playoff exit and Ben Simmons’ uncertain status for the season has led to a fairly tame projection for the Sixers’ win total.

However, the Sixers still have their best player and one of the league’s most dominant forces in Joel Embiid. Along with returning vets Seth Curry and Danny Green, plus the development of young guns Tyrese Maxey and Matisse Thybulle, the Sixers don’t exactly lack talent even without Simmons. When you add in the haul they’ll eventually receive from Simmons’ inevitable trade, you realize just how much this team has to offer.

While Embiid’s health is always a question mark (he’s never played more than 64 games in a season) as long as he is healthy for the majority of the year, I think the over is a solid pick.

Embiid opens up the season tied with Kevin Durant for the second-best odds to win MVP after Luka Doncic. This makes sense, given the fact that the trophy was all but won by the Sixers star last season before a nagging knee injury caused him to miss a few weeks.

You can easily foresee the narrative shaping up Embiid’s way as well – picking up the slack for his primadonna sidekick and leading the Sixers to a successful season. Still, Embiid’s history leads me to believe he won’t play enough games to seriously contend for this award. I’d flag this one as a stay away at these odds.

Of course, we all expect the Sixers to return to the playoffs for the fifth straight season, but the odds aren’t juicy enough for us to jump on that option. If you’re a real pessimist and don’t expect this season to shake out well or just want a consolation prize if disaster strikes, go ahead and bet against your team.

I wouldn’t want those bad vibes on my conscience, though.

Sixers to win the Eastern Conference: +750

BetMGM slates the SIxers to have the third-best odds to win the East, behind only the defending-champion Milwaukee Bucks and the loaded Brooklyn Nets. This is to be expected, with so many question marks surrounding Philly.

Still, the Nets have their own issues with their All-Star Point Guard and the Bucks didn’t exactly look like a juggernaut during their Finals run. I’d stay away from this one, but if you have hope in your heart go ahead and let it fly.

Vegas projects the 76ers as a good-but-not-great team this season, slotting them at a tie for the sixth-most favorable title odds along with the Los Angeles Clippers and Utah Jazz.

I don’t see it happening this year, but if you’re hopeful that the return for Ben Simmons will prove fruitful, then why not back your team. After all, a Simmons trade could provide Joel Embiid with the spacing he needs to be even more dominant, perhaps improving Philly’s playoff chances.

I’d rather get behind this bet than just the Eastern Conference wager in any case.

I honestly don’t care anymore. Just get him outta here.Article presented by SportsbooksOnline.com