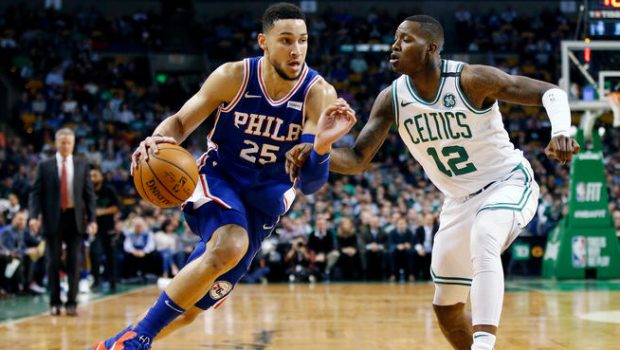 SIXERS AND CELTS BATTLE FOR EAST TITLE NOW THAT KING IS GONE!

Philly won 52 games, tore through the end of the regular season and watched many of its young players emerge into future stars.

The 76ers are sitting pretty with All-Stars Joel Embiid and Ben Simmons (above) ready to dominate the NBA. Now with LeBron out of the picture, there’s a chance for this Sixers team to make an even bigger jump in their second season together.

Youth wasn’t a problem for the 76ers. They played without fear and never seemed overwhelmed by the moment. Brett Brown has them extremely disciplined. However, they were handled pretty easily at the hands of an injured Celtics team in the playoffs. Their inexperience and flaws showed through in a playoff environment. They weren’t quite ready yet.

Next season can be different. If the Celtics are the new 1A in the East, then the 76ers should be considered 1B. They’re just as viable an option to fill the James’ power vacuum as Boston, thanks to elite talent and the assumed improvement of youth. They’ll need to make some free agency signings, and there are concerns with trying to improve the team without an actual general manager in charge, but Brown seems more than willing to handle the role in the interim.

This is what the 76ers wanted. They’re young and they can be the team running the East for years to come now that James is gone. They’re set up so well for it, too.

They cannot miss this opportunity.

It’s weird to say this about a team so young, but their expectations should be set on the NBA Finals. Anything less at this point could, internally, be considered a failure: