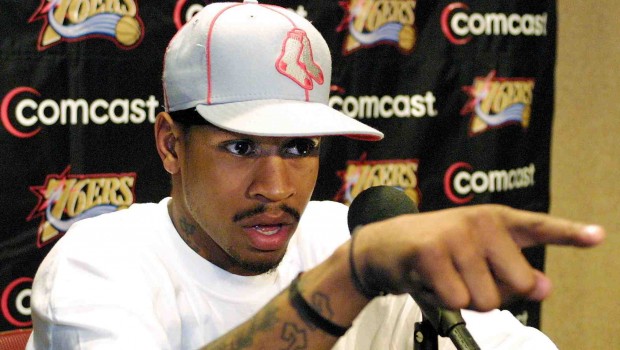 Iverson says he was dealing with the passing of his friend and trade rumors, so he just went off during his press conference when the reporters kept talking about practice.

The Hall of Famer was not only grieving since his friend was killed and his name was coming up in trade rumors, but Iverson was also upset that the Sixers lost in the first round of the 2002 playoffs after making the NBA Finals in 2001.

Iverson is one of the best players in Sixers history as the “pound-for-pound” GOAT even though he’s listed at 6-feet..

The Answer finished his NBA career with averages of 26.7 points, 3.7 rebounds and 6.2 assists. He was inducted into the Hall of Fame in 2016.

Along with being an 11-time NBA All-Star, Allen Iverson won Rookie of the Year in 1997 and MVP in 2001. He was also a four-time scoring champion. His impact on the game can’t be measured, as he changed the ways guys dressed and played the game of basketball.

Allen Iverson tells the true story behind his infamous ‘Practice’ rant in 2002.