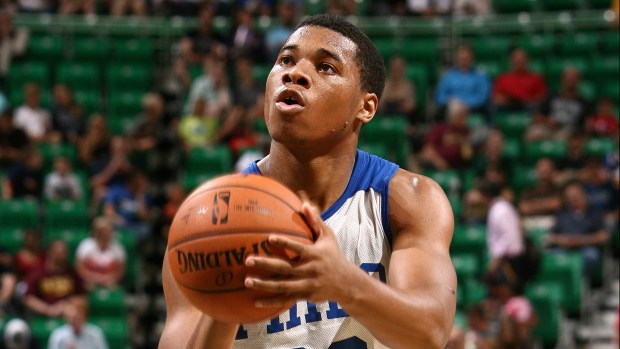 Richaun Holmes (above) took the ball to the hoop strong and knocked down some 3-balls en route to a 13 point, 8-rebound, 2-block run in the victory over the Celtics Tuesday night.

Soon after drafting Jahlil Okafor with the third overall pick in last month’s NBA draft, the Sixers unveiled their prize rookie in the Utah Summer League this week in Salt Lake City. These games are to get new players acclimated to the NBA, getting their feet wet, so to speak.

Okafor, playing in his first 5-on-5 game since the NCAA title game three months ago, and slowly got the rust off. Then he dove in head first with 20 points, 9 rebounds and 2 blocks, showing the whole world he’s the real deal. But especially delighted were Sixer brass — GM Sam Hinkie and head coach Brett Brown in the stands.

Second-year PF Furkan Aldemir also showed he might be ready to make a bigger contribution with excellent work on the boards, and an offensive game, including hitting some 3-balls, easily looking better with his second season on tap this fall.

Hinkie also might have unearthed another big in 6-8, 245 ponder Richaun Holmes, taken with the 37th overall pick out of Bowling Green. Holmes took the ball to the hoop strong and knocked down some 3-balls en route to a 13 point, 8 rebound, 2 block run in the victory over the Celtics Tuesday night. The 76ers beat the C’s off the glass bad, 55-35.

Undrafted free agent T.J. McConnell saw some extended minutes running the point and might be in the running for a backup point guard role.