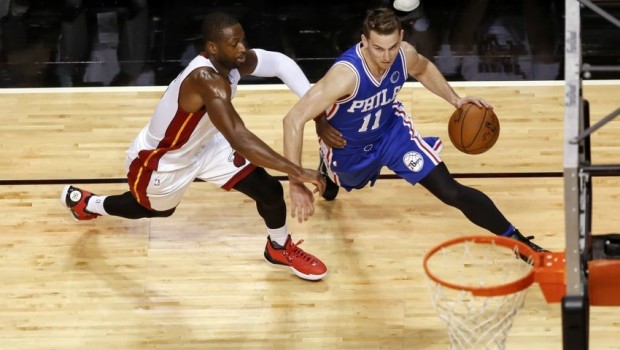 ”They’re an NBA team,” Dwayne Wade (guarding Nick Stauskas above) said. ”They’ve got guys who can play basketball, so you take nothing from them. But they’re not a better team than us, and not on your home floor.”

The Sixers blew an 11-point lead halfway through the fourth quarter and lost!

Even for a franchise that’s known nothing but misery of late, this one stung more than most.

Philly is still winless this season, after Dwyane Wade scored 27 points, Justise Winslow came up with a huge tip-in with 27 seconds left and Miami held the 76ers without a field goal for a critical 7-minute stretch of the fourth quarter on the way to a 96-91 win on Saturday night.

The 76ers are now 0-14 this season, with a losing streak of 24 games when factoring in the end of last season.

”We were in a position to get our first win and we just couldn’t get into anything at the end of the game,” Brown said. ”I give credit to a veteran Miami team. Defensively they were fantastic and we just had a hard time finding a shot. We were in a late clock a lot in the last 5 minutes and it’s a part of cruel path that we are going to evidently have to take.”

They’ve been on that path for a while. But this step was particularly painful.

Hassan Whiteside finished with 13 points, nine rebounds and eight blocked shots for the Heat, who were down 17 at one point and still trailed 87-76 after a dunk by Nerlens Noel with 7:10 remaining. Miami outscored Philadelphia 19-2 to escape, and the 76ers – who started 0-17 last season – are now the owners of the ninth-worst start in NBA history as well.

Isaiah Canaan scored 22 for the Sixers, and Robert Covington finished with 21. Jahlil Okafor scored 16 points and grabbed 11 rebounds, while Noel finished with 10 points.

The Heat led for 4 minutes, 42 seconds in the first quarter and then spent the rest of the night playing uphill – that is, until 2:40 remained, when Wade set up Bosh for a game-tying 3-pointer from the top of the key, knotting the score at 89.

”You definitely have to give Philadelphia credit,” Heat coach Erik Spoelstra said. ”They really came out and competed and played a very good basketball game. This is not how you, as a coach, design it. But I did like seeing the toughness that we had to reveal in the fourth quarter.”

Philly’s 15-point halftime lead directly coincided with the 76ers having a 15-point edge in points off turnovers – 17-2 in the first 24 minutes. … Noel had a highlight-reel basket for Philadelphia’s first points of the night. He collected a steal near midcourt, took a couple dribbles and then whipped the ball around his back to avoid a steal attempt by Goran Dragic before finishing off a dunk.