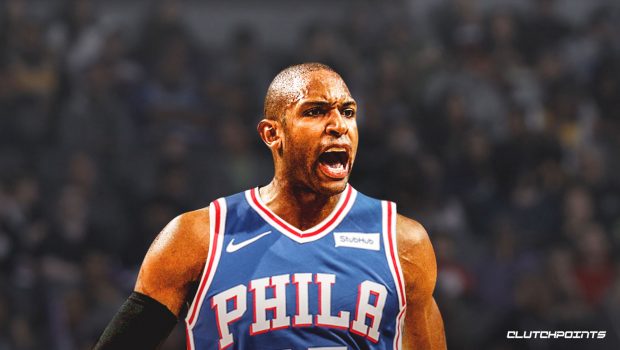 HOW HORFORD (STOLEN FROM CELTS) MAKES THE SIXERS WAY BETTER!

If you were boo-hooing along with the lame-ass local media last night — Jeff Skversky at 6ABC was especially mournful — about the departure of JJ Redick and Jimmy Butler from Sixersland:

Redick has been great for the past two seasons but he’s 35 years old and his shooting specialty is a commodity that the Sixers are starting to fill with Josh Richardson.

Butler was the heart and soul of the defense last season and in the playoffs, but he’s 30 and wanted a five-year deal.

No way on that.

And the Sixers are actually better this morning:

They enticed Al Horford to sign and that precluded the dreaded Boston Celtics of his services.

That’s a two-fer in anybody’s world!

They also brought back Tobias Harris on a five-year, $180 million contract, signed-and-traded Butler to Miami in exchange for Richardson, and used the cap space cleared by the trade for their biggest shocker yet: a four-year, $109 million deal to sign Horford away from the Celtics.

On most nights, Philadelphia’s starting lineup will work a size advantage at every position—all while still being able to stretch, cross-match, and adapt as needed.

Four of the five starters (Joel Embiid, Horford, Ben Simmons, and Richardson) could be All-Defense candidates.

There will always be some concern for spacing around a combination like Simmons and Embiid, but Philadelphia has found three shooters who can each make plays to exploit a leveraged defense. Harris will attack a close-out and find his way to open space. Richardson is a comfortable option for running secondary offense after the ball moves from one side of the floor to the other. Horford is the kind of facilitator who can help get it there: a reader who understands how defenses work and where they leave themselves vulnerable.

What makes the idea of adding Horford worthwhile is that he makes for a uniquely elegant solution to so many of Philadelphia’s problems. For a team always in need of perimeter shooting, a big who made 38% of his threes over the past three years is an easy fit. Considering that Embiid is the most important player on the Sixers’ roster, Horford’s ability to play alongside him—just as he did Aron Baynes in Boston, to great effect—changes everything.

Horford also happens to be the best backup for Embiid imaginable. Through him, Philadelphia now has the means to better manage Embiid’s workload throughout the regular season. Selective rest is more feasible. Lower minute totals should be the new normal. Everything the Sixers can do to preserve Embiid’s body and extend his career, they should—in part because Horford helps mitigate any tradeoffs. Philadelphia was outscored by a damning 20.4 points per 100 possessions in the playoffs whenever Embiid was off the floor. Not only will Horford make those lineups far better, but he’ll help keep Embiid that much fresher (and thereby more dominant) for when he checks back in.

Every contending team in the East also has to prepare for a matchup with Giannis Antetokounmpo, who has become a singular cover demanding singular solutions. Horford may be the player best suited for this particular, impossible task. Considering the intricacy of the variables involved, it can be more difficult than it seems for an NBA team to get just the player it needs. A player’s interest, the expiration of a contract, a team’s salary cap space, the internal dynamics of a roster, and the dynamics of a marketplace all have to align just so to make these kinds of moves a reality. Horford isn’t a perfect player. He just so happens to fulfill many of the Sixers’ needs in slightly unconventional ways at the exact time they could afford to bring him in.