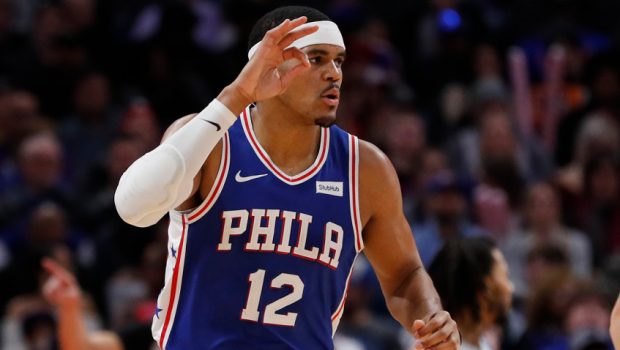 The Sixers are virtually unbeatable at home, where they have won 44 games over the past two season, including 15 this season.

And yet they are a 3 1/2-point underdog tonight!

That’s because they are hosting the Utah Jazz, who have the best record in the West at 27-8 compared to the Sixers East-leading 23-12.

So tonight’s game could be an NBA Finals preview.

“Hopefully it’s a precursor for the end of the year,” 76ers head coach Doc Rivers said.

The Sixers played a stellar all-around game in a 130-114 win over the visiting Indiana Pacers on Monday.

Shake Milton gave Philly a spark off the bench with 26 points versus the Pacers. Joel Embiid added 24 points and 13 rebounds, Furkan Korkmaz contributed 19 points and Ben Simmons had 18 in a balanced effort.

The bench posted a season-best 67 points as the Sixers improved their home record to an Eastern Conference-best 15-3.

There have been a few clunkers for the Sixers this season, including a pair of losses to the Cleveland Cavaliers. For the most part, the team has really meshed well in Rivers’ first season.

“We need him,” Rivers said. “Hopefully, we can get him back next game.”

The Jazz hope to avoid their third loss in four games.

Utah dropped a 129-124 decision on the road against the New Orleans Pelicans on Monday despite Bojan Bogdanovic’s seven 3-pointers and 31 points. Donovan Mitchell added 21 points.

“This is a tough loss,” Mitchell said. “I think we’re all pretty upset about this because it’s stuff that we knew. It wasn’t like we were tired. It wasn’t like they did anything (unexpected). We just didn’t have the urgency and that can’t happen.”

Rudy Gobert, who collected 22 points, nine rebounds and five blocked shots, will need another stellar performance against Embiid as the Jazz close out a four-game road trip.

Individual matchups aside, the Jazz know they’re likely going to score with arguably the deepest roster in the league. Defensively, they allowed the Pelicans to shoot 56.5 percent from the field and score 74 points in the paint.

“When we’re better defensively, the offense takes care of itself,” Gobert said. “And we’ve seen that many times earlier in the season, when our mind is not in the right place. When we don’t play the kind of defense that we know we can play, it usually affects our offense, too. And those nights are usually not our best nights.”

“There’s a lot of things that we didn’t do defensively,” Snyder said. “And that’s what we’ve done coming out of halftime — we’ve raised our level on the defensive end and been able to get out in transition and make people pay for those situations. But if we’re not getting stops, it’s harder for us to play offense.”