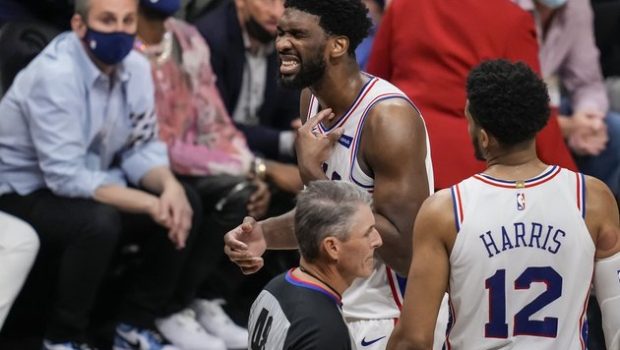 The top-seeded 76ers host the fifth-seeded Hawks tonight in Game 7 of their Eastern Conference semifinal series.

And the players in the Strip sports books make Philly a 7-point favorite to win and go on to the East finals against the Bucks.

Sports books all over America, especially in hoops-crazy Indiana, are gearing up for a big night in anticipation of game 7.

The 76ers staved off elimination with a hard-fought 104-99 win in Atlanta on Friday night.

“It’s fun. It’s a lot of fun,” said Seth Curry, who highlighted his 24-point performance by making six 3-pointers. “That’s a great team over there. … You’ve just got to weather the storm and come back at them at the other end.”

Joel Embiid has 22 points and 13 rebounds while continuing to play through a small lateral meniscus tear in his right knee.

Embiid’s frustration, however, was evident after he felt he wasn’t receiving enough foul calls from the referees. Embiid and John Collins nearly ended up in a tussle behind the basket.

“I just want it called both ways,” Embiid said. “If we are going to call something like nothing on their point guard (Trae Young), it should be the same way when they call the same thing on me if I get touched.”

The Sixers last reached the Eastern Conference finals in 2001, when they ousted the Milwaukee Bucks in seven games.