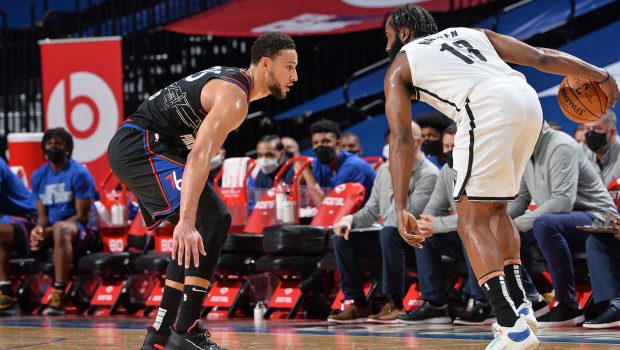 It’s only April 14, and the NBA playoffs don’t start until May 18 with the conference finals in June.

But tonight’s Sixers-Nets game at the Wells has been circled by NBA savants for a long time.

The Sixers and Nets have identical 37-17 records atop the Eastern Conference and this is their third and final meeting of the regular season with 18 games to go.

“We’re going for the past champs, the Lakers,” Sixers guard Ben Simmons says.

“They were the ones who won a championship, so you got to give the respect to them. Obviously, Brooklyn has a lot of talent. But at the end of the day, there’s only one ball and you have to play defense, too.”

Coach Steve Nash described the defending champion Lakers last month as “the team to beat” — even before the Lakers rolled to a win at Barclays Center without LeBron James and Anthony Davis. The Nets versus the 76ers could be an Eastern Conference finals preview, but the Bucks, Heat and others might have something to say about that in the playoffs.

The Sixers beat the Mavs Monday night and the Nets were supposed to play, but Monday’s game was rescheduled for yesterday afternoon following the fatal police shooting of 20-year-old black man Daunte Wright in suburban Minneapolis. From the comparatively insignificant basketball sense, games on back-to-back days are a competitive disadvantage because Nash also is trying to manage the injury recoveries of Blake Griffin and Kevin Durant.

“It does change our approach to everything,” Nash said. “I don’t think we’re going to make any definitive decisions now. I think we’ll wait and see what [Wednesday] morning holds, but we know that we weren’t trying to play guys in back-to-backs, and so we’ll have to digest all of the variables.”

If he were to be limited to one game in back-to-backs, the Nets could have sat Durant against the Timberwolves and saved him for the 76ers.

“I want to play just to get back in the swing of things more so than pinpointing that matchup,” Durant said. “We want to get everyone healthy and acclimated to what we are doing. I think that’s just as important as circling the calendar for Philly.”