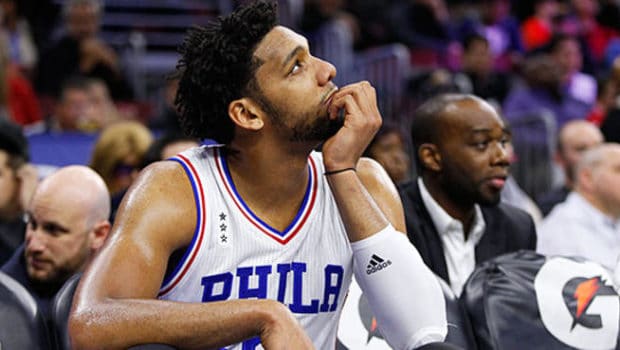 Now, it’ll be fascinating to see what the Sixers do with Jahlil Okafor this summer, given that Richaun Holmes looks to be every bit as good of a player at this point — and actually is a better fit.

So, as the Sixers’ season is winding down with a 28-50 record — way better than anyone predicted — how do they make the jump into next year’s playoffs?

First round: Their own, Lakers (top three protected). Also have swap rights with Sacramento if the Kings finish with a better pick than the Sixers.

There has never been a rookie contract extension negotiation with more sides to it than this. When healthy, Embiid was a game-changing talent, averaging more than 20 points, seven rebounds and two blocks per game while carrying the Sixers to respectability at both ends with him on the floor (when they were generally horrific without him).

But then there’s this: Embiid played a grand total of 700 minutes over 31 games. That means, over the course of this season, he played less than 20 percent of Philadelphia’s total minutes … after missing all of his first two seasons in the NBA with an assortment of injuries.

So now Embiid will find himself in an interesting position this summer. Given how he played when he was on the court, he could potentially push for a max contract, arguing he has the chance to be a generational big man (which he does). The Sixers, on the other hand, would likely counter by saying that they could simply give Embiid a five-year max contract next summer if he stays healthy this season, and that he should take less money now while getting the security of a life-changing contract below the max that will pay him handsomely in the event his body continues to break down.

That’s the formula Stephen Curry followed when he signed a four-year, $44 million extension with the Warriors — one that’s made him the best bargain in the league, and one from which he’ll get a massive raise when he re-signs with Golden State this summer for a five-year max of his own.

It’s a difficult calculus on both sides, and one that will be fascinating to watch. The guess here: Embiid doesn’t agree to an extension, gambling on getting a full max next summer.

2. What’s next for Ben Simmons?

When the Sixers won the 2016 NBA Draft Lottery, it seemed as if things were falling into place. By landing Simmons, the jack-of-all-trades star from LSU, and finallygetting Embiid on the court, Philadelphia finally could see the fruits of years of tanking for the best chances at high draft picks.

But while Embiid became a fan favorite, Simmons couldn’t get on the court, breaking his foot in the first week of training camp. Despite the expectation he would come back sometime in January, he not only wound up sitting for the rest of the regular season, but he won’t even play in Las Vegas in this year’s NBA Summer League.

It was a lost year for Simmons, and one that has left doubts about his ability to be a franchise-changing talent. The hope is that he returns to the court next season with his combination of brilliant passing vision in a 6-foot-10 body to become part of a magical tandem with Embiid. But given his size, there is the fear this could become a lingering issue — and the fact he sat out all season certainly does little to dissuade such thoughts.

Few players will be scrutinized more than Simmons next season, assuming he’s healthy. At this point, the hope is simply that he’s able to be in uniform.

3. What will happen at the Draft Lottery?

The Sixers will be watching all kinds of situations on the night of the NBA Draft Lottery, beginning with their own pick. Given how Philadelphia has shut down various players over the final few weeks of the regular season, it seems like that the Sixers will have, at worst, the fifth-best odds at landing the top overall pick for a second consecutive season.

Then Philadelphia will once again be paying attention to what happens with the Los Angeles Lakers’ pick, which the Sixers have a chance of getting for a third straight season. Right now, the Lakers are tied with the Phoenix Suns for the second-best odds of winning the top pick, though the guess here is they win one more game and fall to third. Either way, the Sixers need the pick to fall outside of the top three spots in the NBA Draft to finally get their hands on it (or else it becomes an entirely unprotected pick in 2018).

Finally, the Sixers will wait to see if the pick swap they have with the Sacramento Kings will net them a better pick than their own. As part of the disastrous salary dump the Kings employed in 2015, Philadelphia will get Sacramento’s pick if it winds up being better than its own. That seems unlikely (Sacramento is currently picking seventh), but it would be fitting for such a disastrous trade to come back to haunt the Kings.

All in all, Philadelphia has as much riding on lottery night as any team in the league. How it shakes out could help determine a lot of things about the Sixers, and their future.

4. Will the Sixers finally spend money in free agency?

Those days, however, are over. Now, Philadelphia is going to head into the summer with oodles of cap space for General Manager Bryan Colangelo to work with, and with a stable of young players — plus at least one, and potentially two, top-five picks in this year’s draft. And with so many young pieces here, the idea should be to go find veterans to fit around them.

There is one obvious candidate for Philadelphia to spend its money on: Toronto Raptors star Kyle Lowry, a Philly native and former Villanova star. Last summer, there was plenty of talk about the Lakers potentially getting local product DeMar DeRozan to leave Toronto, but he never even took a meeting with any teams before re-signing. We’ll see if the same story plays out for Lowry, but if he gets to free agency (and remember that Colangelo made the trade to bring Lowry to Toronto in the first place), this will be a fascinating courtship to watch.

5. Is this the end of the line in Philly for Jahlil Okafor?

From practically the moment he arrived in Philadelphia in June 2015, things have gone badly for Jahlil Okafor. Despite putting up decent numbers last season, he found himself on the wrong end of multiple legal situations, and this season has been spent dealing with injuries and Embiid completely blowing past him in the Sixers’ plans. There was plenty of talk about Philadelphia wanting to move on from Okafor at the trade deadline … only the Sixers couldn’t find a deal suitable enough to get rid of him.

Now, it’ll be fascinating to see what the Sixers do with Okafor this summer. The guess here is that they do everything they can to move away from him, given that Richaun Holmes looks to be every bit as good of a player at this point — and actually is a better fit, both as a backup and with the way the league is going — and that more teams, with time to reflect during the summer, will be likely to take a chance on reviving the talent of someone who was a consensus top-five pick as recently as two years ago and who has had virtually everything go against him since.