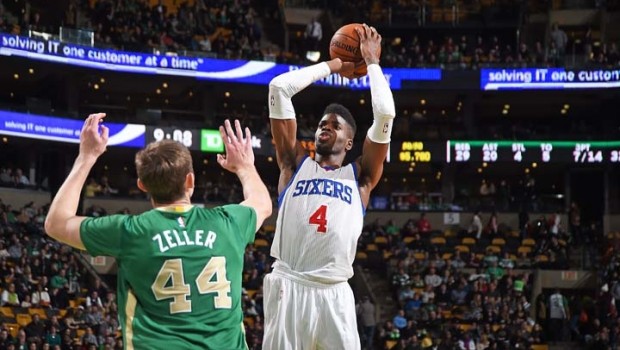 Nerlens Noel had 18 points, 7 boards, 2 steals and a blocked shot.

If the Sixers had to lose to the formerly dreaded Boston Celtics, this was the way to do it:

Tyler Zeller scored a career-high 26 points, Avery Bradley had 20 and the Celtics won their season-high fifth straight game, 108-89 over the 76ers on Monday night.

Brandon Bass added 12 points and Marcus Smart 11 for Boston, which entered the day in a group of four teams separated by one game for the Eastern Conference’s final two playoffs spots. Bradley also had 10 rebounds and six assists.

The Sixers trailed by 20 after one quarter and never made a serious run.

Boston, which never trailed, opened a double-digit edge (17-7) just 5 1/2 minutes into the game, and its advantage never dropped into single digits the rest of the night.

“The 20-point difference in the first period put us in a hole that was hard to dig out of,” Noel said. “The last three quarters we had a more balanced effort — it was about even. We have to do a better job defensively starting out games like that.”

Bradley and Zeller each scored 10 points in the first quarter. The Celtics pushed their lead to 20 on Luigi Datome’s 3-pointer with just over a minute left.

In the second quarter, Boston used a quick 7-0 spurt to improve its lead to 51-24 on Bradley’s third 3-pointer of the half. The closest the 76ers got the rest of the half was 23 points, twice, including a 57-34 deficit at intermission.

Brown inserted Hollis Thompson into the starting lineup. “He’s having a terrific year and he’s shot the ball well,” Brown said. “We’ll start him tonight. He comes with a great attitude, and somebody that’s proven to be a tremendous teammate.”

Noel, who grew up in nearby Everett, entered averaging 1.79 steals and 1.89 blocks per game. The only other rookie to average 1.50 or better in both categories since blocks became an official stat in 1973-74 was Hall of Famer David Robinson.