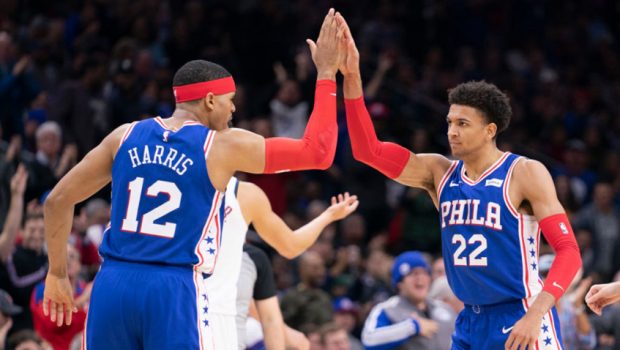 Joel Embiid had 22 points, 10 rebounds and six assists as the Sixers remained unbeaten at home with a 97-92 win over the Denver Nuggets.

Will Barton led the Nuggets with 26 points, and Nikola Jokic added 15 points, 11 assists and seven rebounds. Gary Harris also scored 14 points while Paul Millsap had 10 for Denver, which lost Jamal Murray to a hip injury in the first quarter.

Jokic drove to the basket for a hoop that closed the Nuggets within 95-92 with 18.9 seconds remaining.

Barton missed a 3-point attempt, and the Sixers grabbed the rebound and ran out the clock.

Murray appeared to injure his hip with 6:49 left in the first quarter, and eh didn’t return for the remainder of the game. Murray was scoreless in five first-half minutes, and X-rays taken in the locker room were negative, according to the TNT broadcast.

The Sixers later responded with seven straight points to take a 74-70 advantage with 4:13 remaining in the third.

Horford scored nine points in the third, and the Sixers led 83-76 at the end of the quarter. Embiid closed the period with an acrobatic shot in the paint with 0.2 seconds left.

After going down by 10 early in the fourth, the Nuggets got within 88-86 on a three-point play by Barton with seven minutes to go. However, Thybulle came back with a 3-pointer from the wing for a five-point Sixers lead.

Gary Harris was fouled by Simmons with two seconds left on the shot clock, and he sank two at the foul line to close the gap to 95-90 with 1:52 remaining.