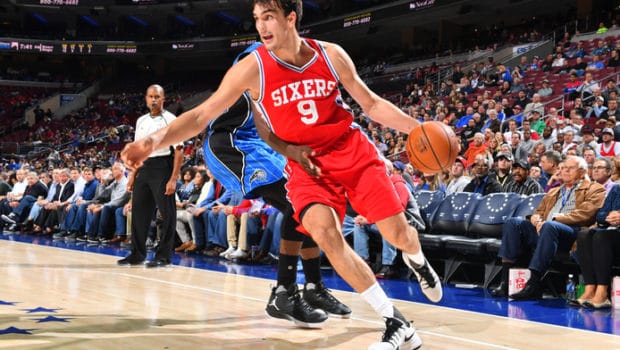 Sixer center Joel Embiid will receive NBA rookie of the year votes even though he played in just 31 games and less than 800 minutes. Other voters will look at players who played in a majority of his team’s games and saw significant minutes.

On defense, he can block shots, protect the rim and rebound. On offense, Saric, who is tied for the rookie lead in double-doubles with nine, has an array of skills, starting with his passing and exceptional court vision.

While his father (Predrag) played pro basketball with the late, great Drazen Petrovic, Saric gravitated toward Magic Johnson highlights as a kid.

“I was watching him so much,” Saric said. “I learned to share the ball. To make it fun on the court, passing is the most important thing in this league.”

He has a nice pump-fake move from the top of the key that allows him to drive to the lane and finish at the rim. He has good hands, knows how to move on the court and is able to lead the fastbreak after collecting a defensive rebound.

Following the Sixers’ 105-102 victory over the New York Knicks last Friday, Sixers coach Brett Brown told reporters, “We all should feel very proud that how can it not be the Rookie of the Year goes through Philadelphia? Say it any way you want, I am proud of what he has been doing. Tonight it validates some of the layers to making that comment even more true.”