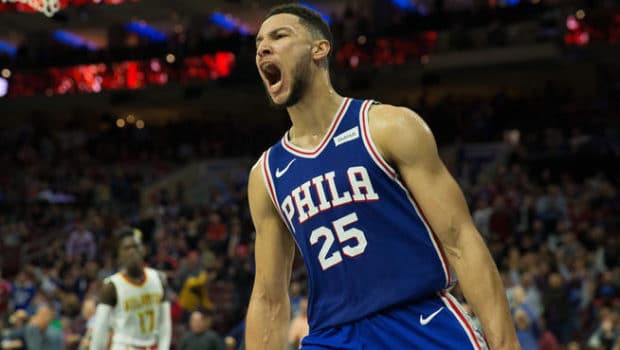 SIXER SIMMONS PASSING THE EYE TEST — AND THE STATS TEST!

It is worth noting what the Sixers stats department tweeted yesterday:

“[Ben Simmons] is the only NBA player (regardless of years of experience) to begin a season with at least 170 points, 100 rebounds and 80 assists in his team’s first 10 games,” it posted,linking to Basketball Reference.

It took Simmons nine games to record two triple-doubles, a feat matched only by Oscar Robertson, perhaps one of the 10 best players to ever pick up a basketball. And he has been consistent — Simmons has tallied at least 10 points, 5 rebounds and 5 assists in every game; he’s averaging 17.8 points, 10.1 rebounds and 8 assists.

To be fair, Simmons’s stats are boosted a bit because he leads all rookies in minutes-per-game. The team also lets him run the point on offense, even as he guards big men on the other end of the floor. But it’s telling that Philly coach Brett Brown already trusts him enough to allow him to play big minutes and control the ball for much of the game.

Simmons is just 21 years old and thus far has been about as good as anyone could have hoped for a rookie (albeit one who sat out what should have been his first NBA season because of injury). There might not be a ceiling for Simmons, but if his floor is anything close to what he’s done in his first 10 games, that’s already a big win for the Sixers.