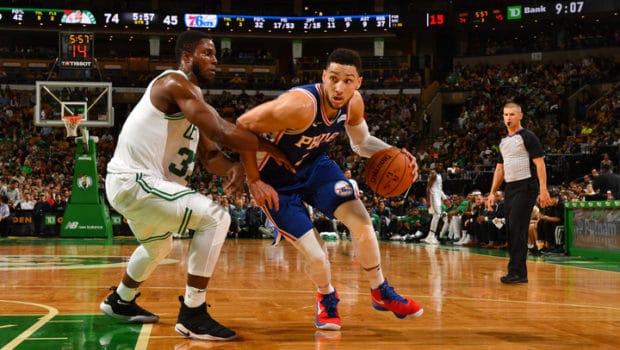 It was only an exo at TD Garden in Boston, but Sixer Ben Simmons continues to impress:

Simmons started at the point, but was later used interchangeably at that spot with rookie Markelle Fultz when the two were paired together.

“That’s different,” Simmons told Sixers.com, when asked about playing off the ball. “That’s probably the first time I’ve been doing that with [Markelle]. I’ve got to adjust, and just learn the way he plays the point.”

The good news for the Sixers is that on the heels of their 113-96 setback to the Boston Celtics, they have two more tune-ups left before the games start to count for real.

Even in defeat, the Sixers were able to throw the likes of Dario Saric and Timothe Luwawu-Cabarrot into the fray. Both second-year players made their respective pre-season debuts, while Fultz returned to the floor after sitting out last Friday’s game.

Having the trio in the mix, Brown felt, was beneficial to the growth of the Sixers’ chemistry.

“You hope it produces that, you think it will,” Brown said.

Saric held his own on both ends of the floor, tallying 9 points and 7 rebounds in 20 minutes. He was given off the last four days on the heels of extensive EuroBasket action in September.

Luwawu-Cabarrot supplied 7 points in nearly 14 minutes against the C’s.

As for Fultz, Brown thought the combo guard had some solid moments. He finished with 12 points (5-11 from the floor) off the bench, and was regularly on the attack.

“Me and coach have an understanding, just being aggressive,” said Fultz, whose scoring total Monday was a pre-season high. “That doesn’t always mean scoring – it just means making the right play. Whatever it takes, that was my mindset coming in.”

Furkan Korkmaz was one of last night’s brightest contributors with 13 points (5-7 fg, 3-4 3fg) and 6 rebounds.