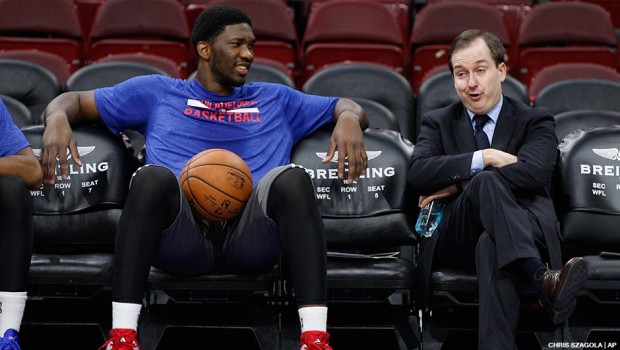 SIXER SAM MUST BE DOING SOMETHING RIGHT: AGENTS HATE HIM!

For those of you who think that the Sixers have become a lost-at-sea franchise under general manager Sam Hinkie (above with injured center Joel Embiid), you must have loved the damning SI.com story that was totally unsourced and written by a well-documented Hinkie Hater.

But there are elements of the organization anxious to start winning soon.

Agents whine that he doesn’t return calls and waives players without telling them first. According to Grantland.com, Jorge Gutierrez’s people complain that Philly promised Brooklyn it wouldn’t waive Gutierrez after demanding the Nets include him in the Andrei Kirilenko deal, only to waive him almost immediately; the Sixers deny making any such promises.

Of course agents complain about Philly! The Sixers don’t use their cap space, they waive a gazillion players every season, and they are the last-chance refuge for any player on his way out of the NBA. The Sixers are confident that players will take their money when it’s time to spend. They’re probably right. But if things go worse than anticipated over the next year, expect some fissures to open.