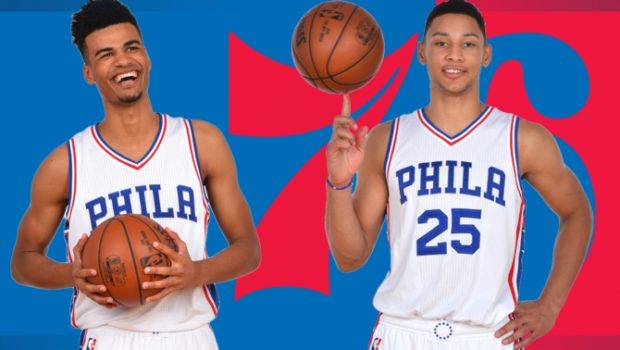 With all the ballyhoo about Sixers super rookie Ben Simmons (above right), slightly overlooked has been their 24th pick in last month’s draft — Timothe Luwawu-Cabarrot, otherwise known as:

The Frenchman made quite a first impression over the course of the Sixers’ trip out west.

Whether bouncing around without the ball to free himself up for an open three-point look, zooming down the lane for a smooth lay-up, or aggressively fronting his man defensively, Luwawu-Cabarrot managed to hold his own amidst summer league competition. In the process, he left a solid first impression.

Between the Utah Jazz and Samsung NBA Summer Leagues, Luwawu-Cabarrot appeared in eight of the club’s nine contests, tied with Bryon Allen, Richaun Holmes, and Shawn Long, and T.J. McConnell for most on the team. During this stretch, the swingman accounted for 8.9 points and 3.0 rebounds in 23.5 minutes per game. He shot just under 37.0 percent from the field, and was 10 for 36 from three-point territory.

“I think every time I can do better,” Luwawu-Cabarrot said following a practice session in Las Vegas, “but I try to give 100 percent and give all my best on defense and offense, take whatever the defense gives me, and just share the ball, and play together.”

Luwawu-Cabarrot was assigned to the Sixers’ starting five in all but two of his eight games. The lone exceptions were the squad’s match-ups with the Los Angeles Lakers and Chicago Bulls on July 9th and 10th, respectively, when rising third-year guard Nik Stauskas took Luwawu-Cabarrot’s spot in the line-up. Regardless of whether Luwawu-Cabarrot was part of the Sixers’ first group, or if he came off the bench, the front office got a long enough look at him to make promising conclusions about his potential.

“‘Three-and-D’” was a term Williams used to describe Luwawu-Cabarrot’s style of play.

“He’s an athlete who’s got the ability to stretch the court,” Williams explained. “We’ll see more as the court gets opened, his ability to slash and get up on the rim.

“Right now, he’s making things difficult [for opponents] on the defensive end, and getting out in transition and running. Sometimes, that running leads to dunks and lay-ups for himself, but sometimes, it’s leading to open shots for others.”

As much as Luwawu-Cabarrot expressed a willingness to let scoring opportunities come to him, he seems to believe that he could exert much more control over his production on the opposite end of the floor.

“I think improve part of the rebound,” he said. “I can grab more…do better on defense. Rebound, and all of the parts on defense.”

With summer league now in the rearview, the Sixers will next reassemble early this fall for training camp. Due to improved player health, and a recent infusion of backcourt depth brought on by free agent signings, Luwawu-Cabarrot could emerge as an ideal candidate to take advantage of the organization’s one-to-one relationship with the Delaware 87ers, the NBA Development League franchise based in Newark.

Asked about Luwawu-Cabarrot’s role in a recent radio interview on 97.5 FM The Fanatic, Brett Brown said, “I feel for the first time we are truly going to tap into our D-League program.

While an assistant for San Antonio for 12 years, Brown regularly witnessed the Spurs turn to its NBADL affiliate in Austin for personnel assistance.

“It certainly makes sense to use the D-League that’s 45 minutes down the road to get him playing,” Brown said of Luwawu-Cabarrot. “You can do all the drill work you want — it doesn’t equal playing against bodies and feeling other players.

“I think you’re going to see him in the D-League from time to time, but I also feel like the excitement we saw from the summer league shows that that’s an excellent prospect.”

The excitement that Luwawu-Cabarrot generated appeared to go hand-in-hand with the energy he exuded, both in personality and performance.