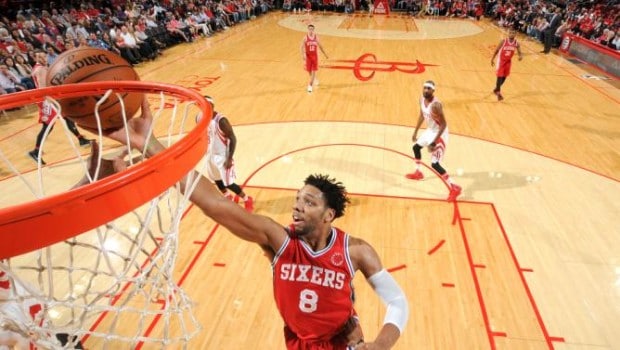 SIXER OKAFOR: ‘NOT PROUD OF SOME OF MY DECISIONS’ OFF THE COURT

The Jahlil Okafor I’m Sorry Tour reached Memphis yesterday, and the Sixers 19-year-old rookie center took to Twitter to apologize for his recent off-court decisions, days after he was involved in a fight in Boston.

The 6-foot-11 rookie from Duke is averaging 18 points and 7.9 rebounds for the winless Sixers.

But he has had problems off the court, which he acknowledged in a series of postings on Twitter on Sunday. He says he is “not proud of some of my decisions” but is cooperating as he deals with the legal process.

Okafor was available to the media before Sunday’s game, but declined comment regarding his off-court problems.

“I’m not talking about anything but basketball,” Okafor said.

An hour earlier on Twitter, Okafor addressed the situation by saying he holds himself to “a higher standard than anyone else ever could.” He added he is “not proud” of some of his recent decisions.

“I own my choices both personally and now publicly,” he said in four entries. “At this point, I am cooperating and respecting the process I have to go through. Going forward, I don’t want to be a distraction for my team and am grateful for the support and guidance those close to me are giving.” He closed by saying he is completely focused “on my responsibilities to the League, my teammates and fans.”