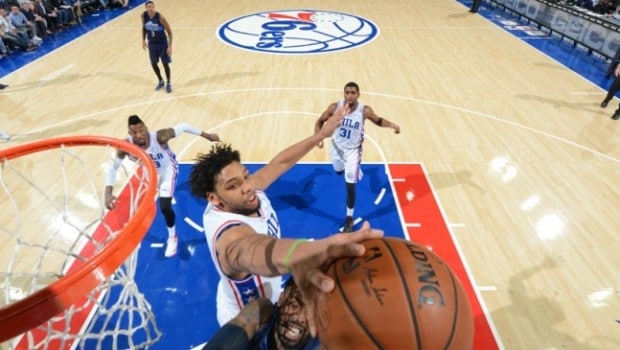 Here are the top 5 contenders for NBA rookie of the year:

The No. 1 overall pick has given us the type of play that we expected — and then some. The seven-footer has shown his versatility on both sides of the ball while leading the T’Wolves to a decent start. With his obvious maturity, NBA readiness, and incredibly high ceiling, Towns is showcasing why he’ll be something special in the league for years to come.

The 76ers have crawled to a league-worst 0-12 start. They’re at the bottom of the NBA in nearly every statistical category, and we can’t say that we’re the least bit surprised. But Okafor is extremely talented and while we’ve marveled at his unique offensive skill set in the post, he has shown some improvement rebounding the ball and playing defense as well. He leads all rookies in minutes played and has been as productive as one can be in the 76ers system.

Porzingis has easily been the biggest surprise of this rookie class. He’s adjusting to playing NBA basketball in The Big Apple more quickly than anyone could have imagined, and is doing so in highlight-reel fashion. He creates matchup nightmares for opponents by utilizing his lengthy wingspan on offense and defense. With such a high level of confidence and energy, the future looks bright for the Zinger.

Many questioned how Mudiay would make the adjustment from playing in China to the NBA when he was drafted, but the 19-year-old has provided some of the answers. His frequent turnovers and sloppy shooting are little cause for concern, as they don’t appear to be problems that he can’t fine-tune while receiving necessary playing time. He’s led the Nuggets to an unexpected 6-5 start and has earned the approval of future Hall of Fame point guard Jason Kidd in the process. “He’ll be better [than me]” Kidd told Christopher Dempsey of The Denver Post.

The only player on this list that comes off the bench, Winslow has played well during his rookie season. He’s showing comfort in the Heat system and has emerged as a key part of their rotation. Although his stats won’t jump out at you just yet, Winslow is a gifted athlete who’s already demonstrating why he was a steal at the 10th overall pick.