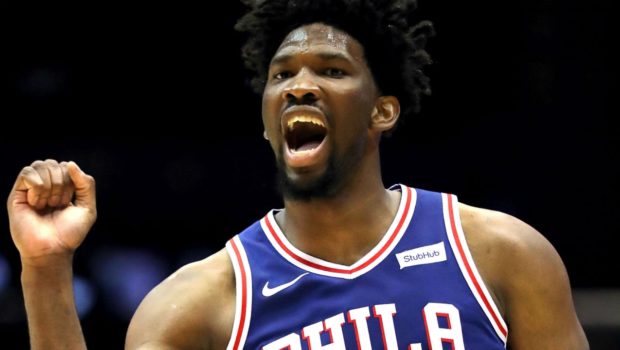 SIXER JOJO EMBIID’S JOURNEY: OUT OF AFRICA TO PHILLY STARDOM!

There’s a lot of talk in Philly about process.

As in Trust the Process.

Which was former general manager Sam Hinkie’s mantra for his method of tearing down the Sixers’ house and then replenishing it with lots of assets disguised as draft picks that is just now paying dividends.

But how about another process?

From Cameroon to South Philly stardom.

How the Sixers found a star center was already the stuff of legend even before Joel Embiid, who posted a line of 46 points, 15 rebounds, 7 assists and 7 blocks on Wednesday night, has managed to play one full season.

The player who has become the future of the league in 2017 was still playing JV in 2012.

He was invited to attend a Basketball Without Borders camp that summer almost solely because he was 7-feet tall. Houston Rockets forward Luc Mbah a Moute, a coach at the camp, identified his extraordinary potential so quickly that he made sure he started high school in Florida that very school year.

“He had only been playing basketball for six months,” Mbah a Moute said in a 2014 interview. “But the moves he was making were moves of guys who had been playing for years.”

But first Mbah a Moute had to convince Embiid’s father, Thomas, that moving to the U.S. for a sport that was still foreign to him was a good idea. “I know it sounded crazy,” he said. “But his dad was a very good handball player. He understands.”

Embiid was stuck playing junior varsity and riding the varsity team’s bench at Montverde Academy. Mbah a Moute suggested that he transfer and called Justin Harden, the basketball coach at the Rock School in Gainesville, Fla.

“I had not seen him play in person,” Harden said. “I looked him up on YouTube.”

Harden was encouraged by Embiid’s highlights. “But highlights don’t tell you a whole lot,” he said. It wasn’t until one of the first days of the 2012-13 school year that they finally met. “I was amazed at how good he actually was,” Harden said.

Embiid had the traits to be a fantastic basketball player. Anyone could see that he was enormous. But he also had great hands. “Very supple,” Harden said. And he had great feet. “Phenomenally gifted,” Harden said. The only problem is that he was still learning how to play basketball. “It wasn’t always roses,” Harden said. “He wasn’t just dominant every single game. He had his ups and downs as he learned to play extended minutes.”

Harden graded his players after every one of their 36 games that year with a statistical formula. Embiid received an A or A+ in 19 of those games. He scored 27 points and grabbed 10 rebounds in one game—that was an A+—but his flashes of brilliance were more like tantalizing flickers. He also had one game with seven points and five rebounds—that was a D—and graded out as a completely average high-school basketball player in a third of his games.

But he made a significant amount of progress in that one season. It was a year that changed his life. “We finally recognized Joel was our best player and needed to utilize him more,” Harden said. “A lot more.”

NBA scouts and college coaches were intrigued even before Embiid was actually good. Kansas coach Bill Self and his former assistant Norm Roberts heard about this raw 7-footer with very supple hands and phenomenally gifted feet and took a pilgrimage to see Embiid practice one day early in his senior year of high school. Self was unusually quiet during the workout.

“What do you think?” Roberts said.

Self was wrong. Embiid was the No. 3 pick in the draft the next year.

He likely would have been the No. 1 pick if he hadn’t gotten injured in his freshman season at Kansas, where he developed his game by watching old clips of Hakeem Olajuwon and developed a sweet tooth by eating ice cream and brownies. Embiid’s stardom at Kansas was mind-boggling to the people who know him way back when. Which, in his case, was only a year earlier. “He was playing JV two years ago,” Harden said at the time. “That’s kind of crazy.”

Embiid’s early years in the NBA also weren’t always roses. He missed his first two seasons with an injury as the 76ers embarked on the most audacious rebuilding experiment the league had ever seen. Embiid was known as a better tweeter than basketball player. But he became something of a Philly folk hero last season when he finally made his debut and averaged 20 points in 31 games. The Sixers rewarded Embiid with a contract extension worth at least $148 million.

He’s making it seem like a bargain. Philly has an 8-6 record. Embiid is averaging 23 points and 11 rebounds. And his performance on Wednesday night against the Los Angeles Lakers was the best game he has ever played. According to Basketball Reference’s game score, a metric not unlike Harden’s, it was the best game any center has played since Shaquille O’Neal in 2000. He still wasn’t satisfied.

“Wish I could’ve had a quadruple-double,” Embiid said.

Harden didn’t stay up late to watch his former player. But he was mesmerized by highlights on Thursday morning. And he couldn’t help but feel that he’d seen Embiid’s moves before. “He was doing that in high school,” Harden said “It just wasn’t as polished. He would either travel or miss the shot.”

Embiid improving so much in so little time is why it no lounger sounds unreasonable to mention him in the same breath as the league’s transcendent players—which is oddly reminiscent of something his father said in a prophetic interview almost four years ago.

“Here in Cameroon, we see NBA players like Kobe Bryant and LeBron, and he wants to be like that,” Thomas Embiid said. “He can do better. Because he’s still learning. He has only three years. When he plays four or five years, he’ll get better and better.”