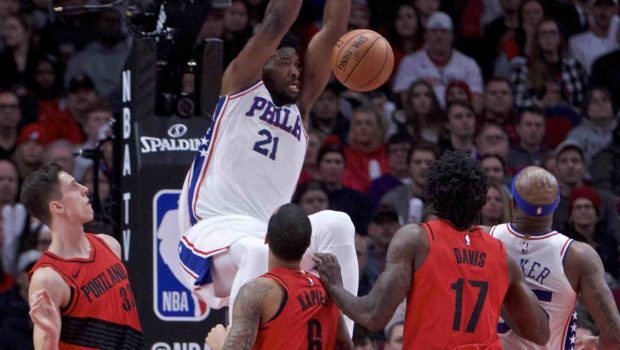 SIXERS JOJO EMBIID CAN’T PLAY BACK-TO-BACKS, BUT HIS LAST GAME WAS THURSDAY, NOT LAST NIGHT, SO WHAT’S UP WITH THAT!?

Yes, it’s frustrating not knowing if your Sixers will have your fave Joel Embiid on the court when they play.

Such as tonight, when they are in Denver without Embiid, who has not been cleared to play back-to-backs, but, wait a minute, his last game was Thursday not last night.

So what’s up with that!

And the national media have noticed.

From here on out, all Sixers broadcasts should probably be accompanied by an Embiid pain chart. Despite All-Star–level production in a win over the Knicks on Christmas Day, Embiid has appeared to be in orange-frowny territory in the two games he’s played after missing three straight because of a back injury. The second/fourth-year center looked sluggish in 34 minutes of action on Monday, and whether that’s a result of the back injury, a lack of conditioning because he’s not practicing, or something else, there were enough grimaces to raise alarms in Philadelphia instead of cats. (Also alarming: The Sixers recently gave up a second-rounder to add another big man.)

Outside of a dramatic leap by Simmons, any prolonged absence from Embiid would likely derail the Sixers’ bid to jump from the bottom of the East to the bottom of the East playoff standings in just one year. (If that matters at all for a young team clearly still figuring things out.) In addition to the aforementioned paltry 1-7 record sans Embiid, Philly has a 100.6 offensive rating and 107.7 defensive rating this season without its antagonistic giant on the court, which is roughly as good as the Bulls. (Which, in this context, is still bad.)