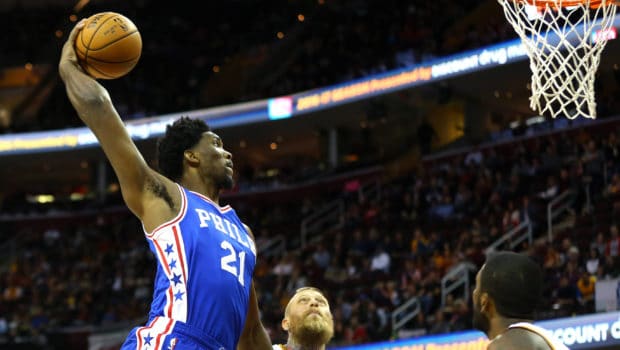 SIXER JO JO EMBIID MANS UP AGAINST THE BEST BIGS OF THE GRIZ!

Last night’s Sixers-Grizzlies game was a wipeout — a 121-91 loss in Memphis — but once again Joel Embiid strutted his stuff.

Offensively, he competed physically enough to bait both Marc Gasol and Zach Randolph into personal fouls. Embiid’s reward was frequent trips to the free throw line, where he went 7-for-8.

Embiid ended with 13 points (3-7 FG), a new pre-season high in scoring for the second game in a row.

“When he was on the floor, there was a presence,” Brett Brown said afterwards. “There was a scoring target.”

Embiid’s involvement was limited to the first half, as it has now been in all four of the Sixers’ outings. He officially logged 12:45 of playing time.

“He ended up with eight free throw attempts. That’s a sign.”

Another significant development Tuesday was that Timothe Luwawu-Cabarrot delivered his most productive showing to-date. Not only did he match Embiid’s team-best point total, he paced the Sixers with nine rebounds.

Selected 24th overall in the draft this past June, Luwawu-Cabarrot helped spark a revitalizing 11-0 run that allowed the Sixers to erase a 18-point first half deficit, and head into intermission with the score tied at 53-53.

“I think he’s a young kid that comes with a lot of energy,” said Brown. “Athletically, he’s been able to get up and down the floor. He’s shown a toughness where he can finish.”

Prior to Tuesday’s game, Brown revealed that Gerald Henderson’s minute budget had been increased to approximately 15 minutes. The Episcopal product ended up getting 16 minutes, 15 seconds in all, and looked smooth throughout the evening. He netted 10 points (3-5 fg, 1-2 3fg), knocking down four jump shots 18-feet or farther from the rim.

Brown was eager to get a longer look Henderson, who signed with the Sixers in free agency.

“What I’ve seen on the court has been limited,” Brown said. “He’s only been allowed to play 12 minutes.

Like Saturday’s game in Cleveland, eight members of the Sixers’ 20-man pre-season roster didn’t play Tuesday, mostly due to injuries. Dario Saric, however, was held out of Tuesday’s match-up in order to rest.

“He almost feels guilty,” Brown said with a chuckle. “He so wants to please,” said Brown of Saric, “and he so wants to be a part of the team that he feels like he’s done something wrong.”

Brown believed that Saric, who has averaged 9.3 points and 4.3 rebounds in 18.1 minutes per pre-season game, stood to benefit from experiencing Tuesday’s contest from a “different view point.”

“Seeing it unfold is another good way to learn,” Brown said. “It’s not just a write off that he’s not playing. He’s still can learn and he will. He’s so prideful.”

The Sixers were again without Jahlil Okafor (right knee) Tuesday. He has been on the shelf for all four of their exhibition contests.

Brown said during his pre-game media availability that Stauskas and Paul could return as soon as Thursday, when the Sixers visit Washington.

Brett Brown Said:
On the value of the playing time that members of the Sixers’ roster received in Tuesday’s second half –
“Without Joel [in the second half] and Gerald limited minutes, and sitting Dario, it was an opportunity for our young guys to get in there and earn an NBA roster spot.”