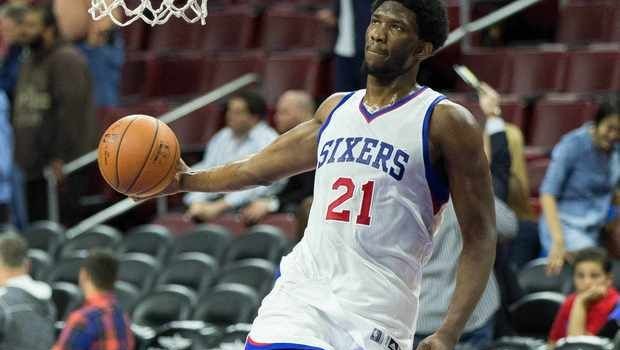 SIXER EMBIID’S FOOT: ‘LESS HEALING THAN ANTICIPATED AT THIS POINT’

There’s potentially bad news on the Sixers front that may affect what they do with the No. 3 draft pick on June 25 and what their plans are for the future.

Late Saturday night a report from Adrian Wojnarowski of Yahoo! Sports revealed that Joel Embiid had suffered a setback on the broken right foot that caused him to miss all of last season. Wojnarowski reports that there is an “issue in the healing process.”

“As part of the conservative approach focused on the long-term health, recovery and care of Joel, we have been closely monitoring his progress, regularly evaluating his status and adjusting our plans accordingly.

“Recently, Joel and Sixers personnel traveled to Los Angeles for a series of routine exams with a number of physicians who have been actively involved throughout this process. During his visit with Dr. Richard Ferkel, a standard CT scan on Joel’s right foot revealed less healing than anticipated at this point.

“Our priority remains providing Joel with every opportunity to ensure he has a long and successful NBA career, and as such, these findings cause us to pause and reassess his current activities. Together with Joel and his representatives, we will continue to consult with the experienced team of doctors who have been an integral part of his evaluations, while also engaging in dialogue with a broader set of experts and specialists.

“Discussions regarding the appropriate next steps are currently ongoing and we will share an update once it becomes available.”

The 7-foot Embiid was the No. 3 overall pick in the 2014 NBA Draft despite suffering a broken foot just days before he was picked.

The Sixers, as they did with center Nerlens Noel in 2013, held Embiid out all of last season so he could fully heal from injury. Embiid was expected to play in the NBA Summer League, but that is now apparently in jeopardy.

Embiid suffered the stress fracture in his navicular bone close to one year ago, and it has been 51 weeks since he underwent surgery. An injury to the navicular bone has been a hard one for any NBA center to overcome in the past, as similar injuries derailed the careers of former centers Yao Ming and Bill Walton.

Sixers fans hope that Embiid still has the better part of four months to recover before the start of next season.

However, his participation in summer league games is certainly in doubt.