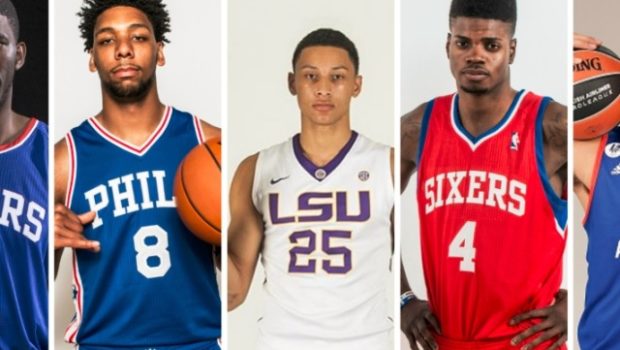 Sixers No. 1 overall pick in last week’s draft Ben Simmons is a one-off

It’s not like teams will have a lot of 6-10, 245-pound playmaking power forwards to choose from in the future.

Some of the other recent No. 1 picks — Karl-Anthony Towns and Anthony Davis as bigs who will stretch the floor with shooting range, Andrew Wiggins as a super-athletic wing in the speed game of the evolving NBA — yes. Simmons, no.

That makes his rookie season, for lack of a more delicate term, a laboratory.

And that starts now, with the 76ers in the Utah Summer League beginning Monday after the Orlando Summer League opens Saturday and with both leading up to the annual Las Vegas Summer League extravaganza on July 8 that will also count the Sixers among the participants.

It is impossible to know what to expect from Simmons on many different levels, including what Philly’s roster will look like around him when the games start to count for real.

Will Dario Saric be in uniform as the Sixers continue to hope they can lure the 2014 lottery pick from Europe in a move that would ease some of Simmons’ ball-handling responsibilities?

This much, though, is certain: Simmons has the most physical talent among rookies and will be in the best position to impact his team in every way, and so he comes out of the draft as the early Rookie of the Year.

For now, he is a distributor joining a roster that has very few players capable of doing anything with a pass, and maybe even fewer before long (depending on the outcome of Jahlil Okafor trade talks). But if Philly adds dependable scoring and/or any consistent perimeter threat via trade or free agency, Simmons’ assist numbers go up … and so do his chances for Rookie of the Year. He should be able to rebound no matter what.