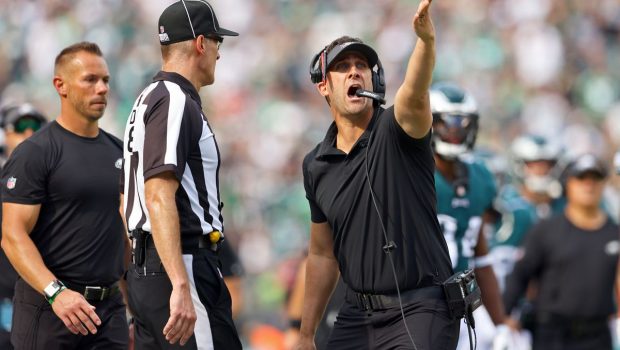 The Eagles lost to the Chiefs yesterday 42-30.

And Miles Sanders, their best running back, got seven plays called for him to carry the ball.

This, after he got two last Monday night against Dallas.

He has totaled 37 carries in four games,gaining 169 yards for a 4.6 average gain.

So, what’s up, coach Nick Sirianni?

“You’re furious that you go to 1-3. But we can also see there are some things that are to build on there,” Sirianni said after the game.

“The self-inflicted wounds have to stop. I know I sound the same, but it’s still true. We have to stop the self-inflicted wounds of putting ourselves in holes with penalties. The guys did a good job. We won the turnover battle. Our defense took it away; we didn’t give it away. They forced another fumble on special teams. There are some good things obviously right there.

“ … My message is never really going to change win or lose: We have to make our corrections and get better from it.”

“Look, we lost. We lost. We lost the game,” Hurts said of his performance. “(I) have to do more, have to do better. And this is what I will say: You have every opportunity to learn, every opportunity — everything that you do, you learn from it. And we are clearly not there as a football team because we lost. But, we are this close. We are this close. And that is something that I believe.”