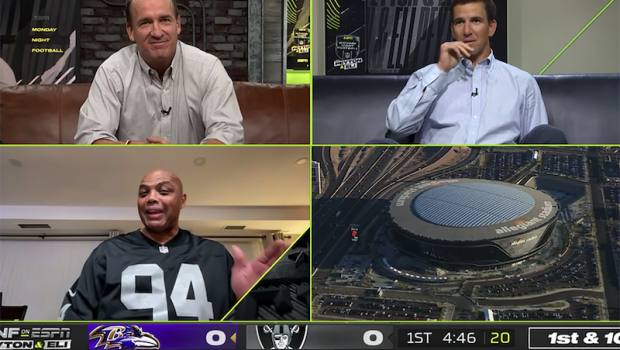 SIR CHARLES HORNS IN ON ELI AND PEYTON MANNING SHOW!

Last night’s alternate ESPN2 telecast of the Baltimore Ravens and Las Vegas Raiders game was the debut of the Peyton/Eli Manning show.

Most Mondays this season, Manning will be at a friend’s warehouse in Denver that has been outfitted with a TV studio, sharing the screen and commentary duties for “Monday Night Football” with his younger brother, Eli, who will appear from his house in New Jersey.

They clucked it up with Charles Barkley, who announced that he bet the Raiders with the points, and Seattle Seahawks quarterback Russell Wilson.