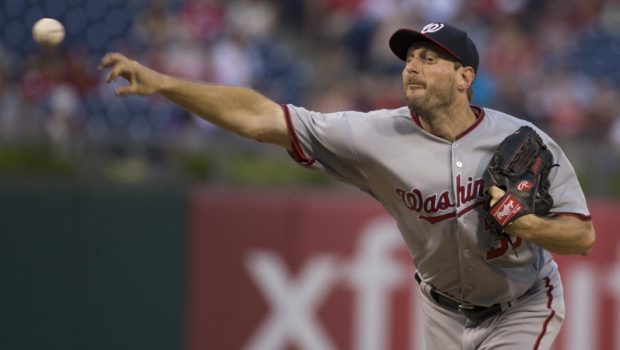 The Phillies have now lost six straight and 10 of their last 12. With this loss, the Phillies fell under .500 for the first time since they were 9-10 on April 24.

Or was the Nationals’ 7-2 win over the Phillies last night just another example of the Phillies not measuring up to a much better team?

Max Scherzer (above) was dominant as he led the Nats to a three-game sweep of the Phillies at Citizens Bank Park. He pitched eight innings and struck out 11.

The only runs he gave up came on a Tyler Goeddel two-run homer to left in the seventh. It was the 39th time in Scherzer’s career he’s struck out at least 10. The Nats considered removing him from the game after the seventh but Scherzer convinced them to leave him in the game for one more inning.

“I know my pitch count, I know how I feel and I knew I was strong,” Scherzer said. “And not only could I start the inning, but I knew I could finish the inning, too.”

Adam Morgan was effective early, needing only 65 pitches to get through five innings. But Washington torched him for four runs in the sixth. Home runs fromWilson Ramos and Danny Espinosa did the damage. The Nats tacked on one more after Daniel Murphy tripled and was driven home on a Ryan Zimmerman sac fly. Murphy couldn’t be cooled off this series, reaching and scoring twice on Wednesday and finishing the series 6-for-12 with four RBIs and four extra-base hits — just two fewer than the Phillies had as a team.

“Adam Morgan, he seems like he’s on the verge of getting through it, but then he makes mistakes,” manager Pete Mackanin said. “Too many mistakes out over the plate, up in the zone.”

The Nationals’ sweep not only gives them breathing room over the Mets, but also knocked the Phillies into fourth place behind the Marlins.

“We know where we need to go,” Mackanin said. “We know we’re not there. We’d like to be where the Cubs are with their young players.”