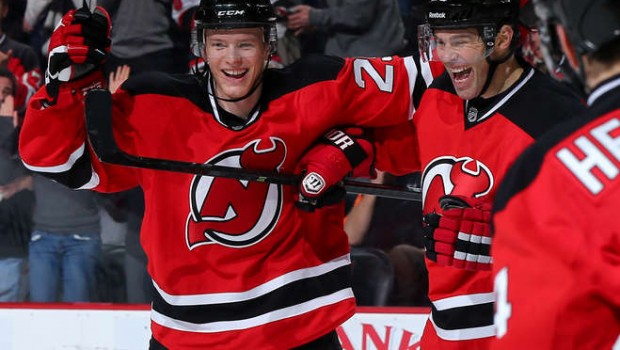 At least the Sixers have a method to the madness of losing a lot.

They will be able to draft better players for the future.

What exactly is the Flyers’ reason for losing the last two games to theoretically inferior teams — Carolina and Jersey?

When will owner Ed Snider and general manager Ron Hextall realize that the Flyers’ players are just not good enough?

Maybe the tipping point occurred Saturday night in Newark as the Devils knocked them off 5-2, with former Flyer Jaromir Jagr (right in photo above) getting a hat trick at the age of 43!

The Flyers (14-18-7) were playing the last game of a season-high eight-game road trip. They went 3-4-1, but were 0-4-1 with nine goals in the past five games after scoring 16 goals in winning the first three.

“We’ve all got to be better,” Philadelphia coach Craig Berube said.

The Flyers had to use 11 forwards and seven defensemen because captain Claude Giroux and center Scott Laughton were unable to play.

Giroux sustained a cut on the back of his left leg Friday in a 2-1 loss against the Carolina Hurricanes. He is tied for third the NHL with 43 points. Laughton sustained a lower-body injury against the Hurricanes and is day-to-day, Hextall said.

“Obviously that [stinks],” Flyers forward Wayne Simmonds said of not having Giroux and Laughton, “but the way we played tonight, we could have had Wayne Gretzky in our lineup and I don’t know if we would have won. Honestly, I think we played a little better in the latter half of the game, but it was already 5-0 by that point.”

Mason has allowed seven goals on 33 shots in five periods against the Devils this season.

“The few mistakes we made they capitalized on,” Lecavalier said. “We didn’t start the way we wanted and they definitely capitalized on it. Sometimes you have your goalie making those 20 saves and sometimes not. Sometimes the defense and forwards are playing better, but we just didn’t in the first period. They took advantage of it.”

If Devils right wing Jagr does something special on the ice nowadays, it typically comes with the caveat that he’s the oldest to do it the NHL since … fill in the blank.

Saturday at Prudential Center, Jagr became the oldest NHL player to do something, period.

Jagr’s hat trick was his first in an NHL game since March 22, 2006, also against the Flyers. He moved within three goals of tying Phil Esposito (717 goals) for fifth on the League’s all-time list, and within 18 points of tying Ron Francis (1,798 points) for fourth in League history.

“I like to score hat tricks, but I don’t like the thing you said that I’m the oldest guy,” Jagr said. “I don’t want to be the oldest guy, but I’m glad I scored.”

The Devils are too. They needed a breakout offensive game after scoring 21 goals in their previous 14. They scored five goals on 14 shots in the first 32:32 before Andrew MacDonald and Vincent Lecavalier scored for the Flyers.

Scott Gomez had a goal and two assists for New Jersey (14-20-7). Patrik Elias scored, and Adam Henrique had two assists.

The Devils scored five goals in a game for the fourth time this season, the first time since their 5-3 win against the Toronto Maple Leafs on Dec. 4. They’ve done it twice against the Flyers, including a 6-4 win on opening night at Wells Fargo Center.

It was the 14th time in 41 games the Devils scored at least three goals in a game; they had done it twice in their previous 17 games.

“Now we’ve got to start taking advantage, we’ve got to go on a run,” Gomez said. “The effort is there. The way we played … there is the formula. These games are all huge. We’re kidding ourselves if we don’t go out like that.”

Making Jagr’s night more impressive was the fact he was breaking in new skates. Jagr said he took the skates out of the box and used them for the first time in warm-ups. He said he’s never done that before, that he typically likes to practice with new skates before using them in a game.

“I didn’t feel strong enough the last few games and I knew I needed them,” Jagr said. “I said, ‘I’ve got nothing to lose, it can’t get any worse.'”

Jagr gave New Jersey a 1-0 lead at 13:20 of the first period when he scored on a shot from behind the goal line after Emery coughed up the puck behind the net. Jagr reached his stick above the goal line and used his backhand to whip the puck into the net before Emery could get into position.

Elias scored a power-play goal 2:22 later to give the Devils a 2-0 lead on backdoor play from the right circle off a blind pass from Martin Havlat. Elias is two goals short of 400 and three points shy of 1,000 for his NHL career.

Jagr scored his second goal of the first period with 3.8 seconds remaining on a wrist shot from the right circle.

Gomez and Jagr scored in the second period to give the Devils a 5-0 lead with 7:38 remaining.

“It’s nice to see offense, there’s no question,” Devils interim co-coach Lou Lamoriello said. “That’s something we haven’t had. And they were work goals, they were good goals.”

Three of them were historic goals.