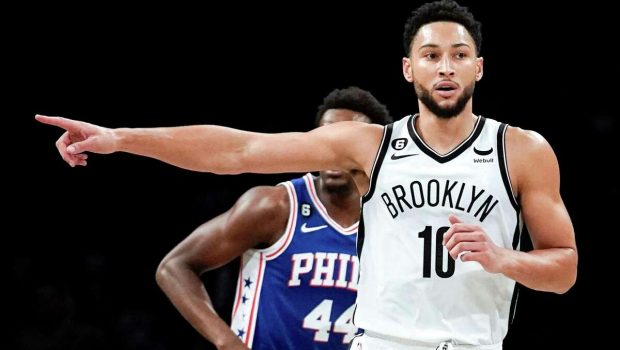 SIMMONS IS A LOSER AND PEOPLE LOATHE HIM: HE’S JUST NOTICING!

Ben Simmons held out last season, forcing the Sixers to trade him 54 games in to the Nets for James Harden.’

Essentially, he tried to blow a hole in the Sixers season.

Then he failed to play a game for the Nets, claiming mental health issues and a bad back.

So, you’ll excuse our surprise that many people loathe Simmons.

And they make fun of him.

Now he is noticing and pushing back to ESPN:

After a video of Simmons shooting an air ball during an event for fans in a Brooklyn park on Sunday went viral, the former All-Star had to chuckle when asked how he blocks out all the noise that seems to find him.

“It finds me all the time,” Simmons told ESPN prior to Wednesday night’s 107-97 preseason win against the Milwaukee Bucks.

“And it doesn’t f—ing stop. Sometimes I’m even sick of it, but then I’m like, ‘OK, I’m Ben Simmons, you know? It comes with being Ben Simmons right now.’

“Even the other day there was a clip of me air balling a shot at the park. Meanwhile, like 10 guys airballed multiple shots. So it’s like people will find one clip and try to make it that everything — like Ben can’t do [this or that]. Like come on man, you think I’m just airballing every shot? It’s not true. But it comes with it, and you got to have tough skin and I realize that, but nah, I can’t take everything personally. It’s social media.”