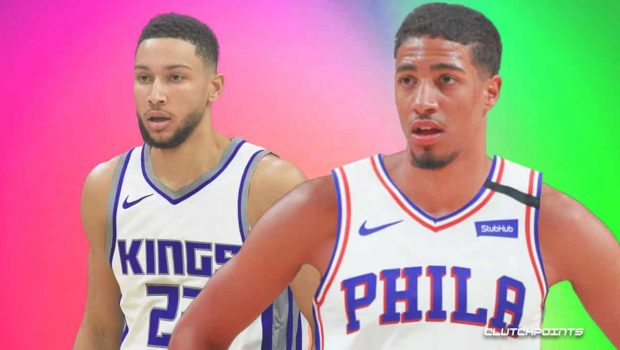 SIMMONS FOR HALIBURTON? SIXERS WOULD LEAD NBA IN TYRESES!

Ben Simmons trade rumors have achieved critical mass, with the report that the Sixers may wait until summer to dump the crybaby so they can pursue James Harden.

However, in the real world, they apparently see the Sacto Kings as a viable partner.

Charania reported, citing league sources, last week that the Kings have no plans to trade Haliburton or De’Aaron Fox and hope to build around the two young guardsgoing forward.

“Sacramento and Atlanta have been among the most engaged recently in talks on Simmons, sources said, but team officials with those organizations doubt the 76ers will lower the price threshold for Simmons before Feb. 10,” Charania and Amick wrote Monday morning.

The Kings continue to struggle through the 2021-22 season, currently standing 12th in the Western Conference with an 18-30 overall record.

76ers president of basketball operations Daryl Morey said last week that there are deals that work with the Kings during a radio interview, but that nothing definite was on the horizon. Keith Pompey of the Philadelphia Inquirer reported, citing league sources, that a deal consisting of Haliburton, Buddy Hield, Harrison Barnes and two first-round draft picks was being considered by the 76ers for Simmons, Tobias Harris and Matisse Thybulle.

“I will answer this as best I can,” Morey said. “I can’t talk about a specific [trade]. I can tell you for sure there are deals with the Sacramento Kings that I think would work. Will those deals ever happen? I have no idea. Are they just straight deals with the Kings? Probably not. Is it multiple teams? Probably. But for sure there are deals that are possible that would go over our line.”

If this deal goes through, the Sixers could pair Tyrese Maxey and Tyrese Haliburton in their backcourt!