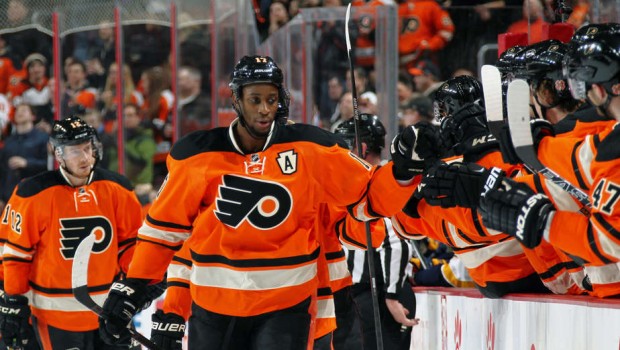 Just when it seemed the Flyers had blown whatever chance they had to make the playoffs, a funny thing happened Saturday at the Wells.

Jakub Voracek and Wayne Simmonds scored in the shootout and the Flyers defeated the visiting Nashville Predators 3-2.

Simmonds also had a goal in regulation, as did Ryan White. Goalie Rob Zepp made 20 saves through overtime, then stopped Matt Cullen and Craig Smith in the tiebreaker.

The Flyers improved to 3-7 on the shootout this season, and their win against the Presidents’ Trophy leaders comes after back-to-back losses against teams below them in the standings.

The victory also moved the Flyers to move within four points of the Boston Bruins for the final Eastern Conference wild-card spot into the Stanley Cup Playoffs.

Colin Wilson and Smith had goals for the Predators, and goaliePekka Rinne made 31 saves.

The loss was the Predators’ second straight after their six-game win streak was ended Thursday at the New York Islanders.

The Flyers were dominating play through two periods, holding the Predators to seven shots, but the Predators took over in the third, getting the tying goal in the opening seconds of the period.

The Flyers got the puck deep in the Predators’ end but Voracek couldn’t hold Rinne’s clearing attempt along the wall. That allowed Cullen to spring Mike Fisher for a 3-on-2 rush. Fisher sent a pass across to Smith on the right side and his shot slipped between Zepp’s pads 23 seconds into the period for his 18th of the season.

White gave the Flyers a 2-1 lead midway through the second period. White and Brayden Schenn led a strong forecheck that forced Predators defenseman Seth Jones to give the puck away deep in his zone. R.J. Umberger got the puck and tried to skate through the slot but the puck rolled off his stick. It went right to White above the hashmarks and his wrist shot beat Rinne for White’s second goal of the season.

The goal gave White points in four straight and goals in back-to-back games for the second time in his six-season NHL career; he also had goals in consecutive games Feb. 6-8, 2014, as a member of the Montreal Canadiens. It’s also the only time in White’s NHL career he has points in more than two straight games.

Wilson tied the game with 1:02 left in the first period with his 19th goal of the season. Wilson intercepted Michael Del Zotto’s pass out of the Philadelphia zone and skated the puck back into the Philadelphia end down the left-wing boards. With defenseman Braydon Coburn giving him room, Wilson fired a wrist shot that slightly changed direction off Coburn’s stick and went between Zepp’s blocker and the near post.

The goal came on Nashville’s second shot of the period, and first in a 13:47 span.

Simmonds gave the Flyers a 1-0 lead at 8:59 of the first period. Del Zotto took a cross-ice pass from Coburn on the left side and sent a shot on net that Simmonds, who got position on Nashville captain Shea Weber in the left circle, tipped down between Weber’s skates. The puck bounced on net, past Rinne’s glove and inside the right post for Simmonds’ 23rd goal of the season.

The goal also gave Simmonds points in seven straight games, a new career-best. He has five goals and four assists during his streak.