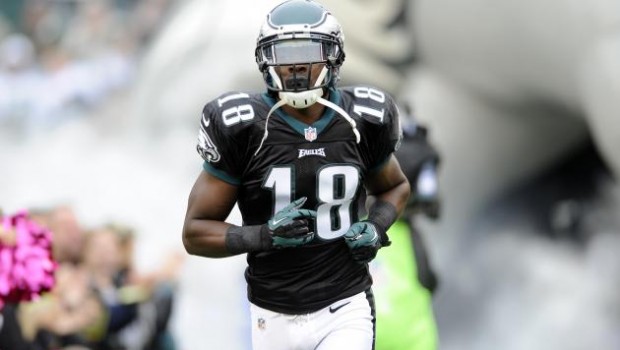 When Jeremy Maclin signed a one-contract for the 2014 season, he wagered on himself to have a huge year coming off ACL surgery, and would cash in on a long-term deal with the Eagles.

That’s exactly what happened with Maclin (photo above) getting 85 receptions for 1,318 yards and 10 TD’s.

Now a new contract has to be offered, and signed, sealed and delivered before free agency starts in March.

Conversely, Riley Cooper took a step backwards, with 55 catches for 577 yards. He also slid back with 3 TD’s. It remains up in the air whether Cooper will be back in the nest in 2015.

It’s been pointed out that the loss of DeSean Jackson, and his ability to blow the top off defenses was missed in the Birds’ arsenal this past year, and it’s a fair point.

However, rookie Jordan Matthews had a very productive first NFL campaign with 8 touchdown passes, piling up 872 yards in the process, looking better as the year ground on. Matthews is a keeper and appears to be the kind of worker who will improve as time marches on.

Rookie Josh Huff had a sporadic first season, chipping in only eight balls for 98 yards. He was often injured throughout the year, but Huff showed flashes of being more productive.

Free agency, plus the NFL draft should net two and possibly three pickups for the 2015 season. In no particular order, here are four who could be wearing Eagle wings on opening day in September:

Prospective draftees with size that could replace Riley Cooper: