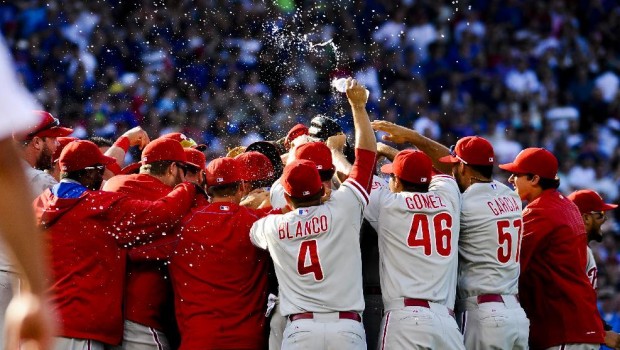 A SIGN THAT HAMELS MAY BE HEADED TO CHICAGO! This sign on a bar across from Wrigley Field may be prophetic.

Cole Hamels had a big smile on his face as he hugged Ryan Howard and Carlos Ruiz after the final out. The rest of the Phillies then mobbed the pitcher near the mound while the crowd of 41,863 delivered a long standing ovation.

“He looked like he was on a mission,” Phillies manager Pete Mackanin said.

Before Saturday’s outing, it looked as if all the trade rumors were taking a toll on the usually dependable Hamels. He allowed 14 runs and 20 hits over 6 1/3 innings in his previous two starts. He was 0-4 with a 5.56 ERA during a nine-game winless streak, which matched a career high.

But Hamels said he likes pitching in Chicago, and it showed on the three-year anniversary of his $144 million, six-year contract with the Phillies.

“There’s a great history in this ballpark and it’s a fun place to come and play,” he said. “I know it’s one of our top places to play. I grew up watching on WGN and the Cubs play. To be able to play in a day game just knowing I’m able to go out there and enjoy it and be myself -and obviously this is what happened – it’s a special feeling.”