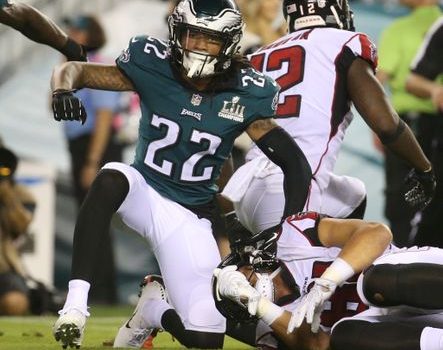 SID JONES HAS EAGLES SITTING UP AND TAKING NOTICE!

“Whatever his role is, whatever his job is, as far as whoever we’re playing, he’s been doing an outstanding job,” fellow cornerback Jalen Mills said yesterday about Sidney Jones.

Jones was the Eagles’ second-round pick in the 2017 NFL draft, which surprised some observers because he had suffered an Achilles tendon injury in March, just a month before the draft.

He sat out almost all of last season’s Super Bowl run, playing in a meaningless Cowboys game at the end of the season.

This season has been another story:

Jones has played 82 snaps against the slot and has only been targeted 11 times, according Pro Football Focus. He has only allowed 25 receiving yards at the nickel position.

Jones recently showed off his athleticism during the Eagles’ Week 3 win over the Indianapolis Colts. On one play, Jones was blocked low by a wide receiver, and despite taking a big hit to his legs, he immediately bounced back up to his feet and helped stop a ball-carrying receiver while battling with a 6-foot-5, 345-pound offense tackle.

“I’ve seen a thousand people get cut by a receiver [and] land on their face and for him to kind of leap frog and get up and tackle the lineman … he didn’t make the tackle but he allowed Jalen Mills to make the tackle,” starting strong safety Malcolm Jenkins said.

“We joked about it with him kind of jumping over a defender but that was one of those plays where if he didn’t do that, Jalen’s got a blocker and that guy could make a dangerous play. That’s the kind of things we want to see out of our teammates and that kind of effort.”

Veteran safety Corey Graham thinks Jones has put in the work that’s needed to transition and excel at a new position.

“He’s done a great job,” Graham said. “He’s just come a long way. He’s studying well, he knows what he’s going to do, what he’s supposed to do and he’s making plays out there and that’s what we expect from him.”

Fellow second-year cornerback Rasul Douglas has been friends with Jones since the NFL Combine.

“He’s good,” Douglas said, regarding Jones’ production so far. “He’s working, he’s getting better and I think that’s the most important part. Like he’s actually learning and getting better every week, because it’s still something new to him. Until you play a whole season at a position, it’s really kind of new. He’s learning and he’s taking it all [in] because nickel is one of the hardest spots on our defense [to play].”

As Jones continues to grow in his new role, the expectations will continue to increase. Though some have seen his growth as a sign that he should move to the outside, his work as the Eagles’ third cornerback has kept the team afloat in coverage thus far.

“Whether he’s at corner, whether he’s at nickel or dime, it doesn’t matter,” Mills said. “He’s a guy who knows the defense. I think it’s fairly – I’m not going to say easy – because nickel is a hard position but as far as his mental aspect, it’s easy for him.”