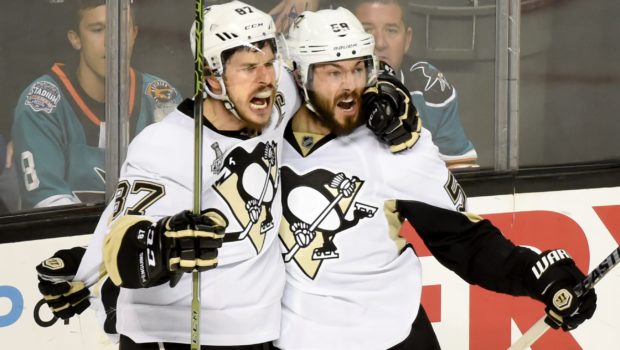 SID (AT 28, NO LONGER THE KID) CROSBY LIFTS PENS TO A TITLE

This is what the Stanley Cup means to Sidney Crosby.

Sidelined for virtually the second half of the Pittsburgh Penguins’ Stanley Cup-clinching victory against the Detroit Red Wings in Joe Louis Arena in 2009, center Crosby primarily watched his teammates defend their goal from his bench as he dealt with an undisclosed injury.

Last night, seven years to the day of that victory in Detroit, Crosby helped secure the franchise’s fourth Stanley Cup championship and in the process, won the Conn Smythe Trophy as the most valuable player of the postseason.

“He’s been awesome,” said defenseman Olli Maatta. “He’s the main leader. He carries this team. When he’s on, everybody follows him. That’s the main reason, I think, we won.”

Crosby was instrumental on the team’s final two goals of a 3-1 win at SAP Center.

Only 1:19 after the Sharks tied the score, 1-1, the Penguins regained a 2-1 lead at 7:46 of the second period. Working the puck deep on the left wing, defenseman Kris Letang backhanded it into a pile of bodies in front of the cage. Penguins center Sidney Crosby was able to dig the puck out of the crease, veer behind the net and fed a pass to Letang, now position to the right of the crease. Letang lifted a wrister which clanked into the net off the inside of Jones’ blocker. Crosby and left winger Conor Sheary netted assists.

The Sharks spent the rest of the game trying to force a tie and pulled goaltender Martin Jones late in regulation for the benefit of an extra attacker. Crosby helped set up right winger Patric Hornqvist for an empty-net goal with 1:02 left in regulation. Crosby had the lone assist.

Accused by Sharks center Logan Couture of cheating on face-offs after Game 2, Crosby dominated the circle in Game 6 by going 13 for 17 (76 percent) including two wins in as many faceoffs against Couture.

“Everybody judges Sid on his points and how many goals he gets and things like that. But he’s really an all-around player. He plays in all zones on the rink. He plays hard. He leads his team. He leads by example and he does things quietly. He’s a quiet leader but a really good one.”

The award is determined by a vote among members of the Professional Hockey Writers Association.

Crosby, 28, finished the postseason with 19 points (six goals, 13 assists) in 24 games, sixth in the NHL and second on the Penguins to right winger Phil Kessel (22 points in 24 games).

The award punctuated a postseason for Crosby that saw him finish with a team-leading three game-winning goals.