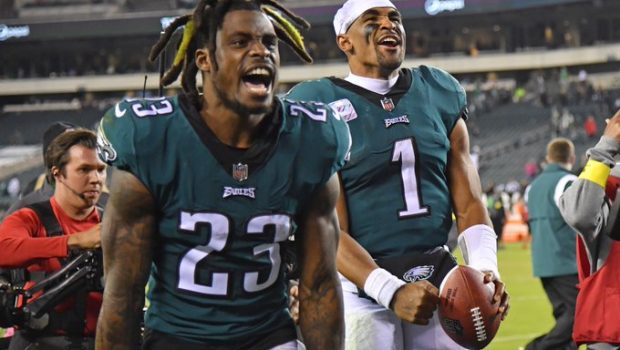 SHOUT-OUT TO EAGLES DEFENSE THAT PICKED OFF WIN OVER DALLAS!

The Eagles held off a second-half push from the Dallas Cowboys to pull out a 26-17 win and remain the NFL’s lone unbeaten team at 6-0.

The Birds scored 20 points in the second quarter, behind touchdowns from Miles Sanders and A.J. Brown, to take a 17-point lead into halftime.

Dallas whittled that lead down to just three points early in the fourth quarter, with Cooper Rush capping a 93-yard drive with a touchdown pass to Jake Ferguson that made it 20-17.

The Eagles were able to respond on the ensuing drive. Jalen Hurts connected with DeVonta Smith for his second passing touchdown, putting Philly ahead 26-17 before a failed two-point conversion attempt. Rush tossed an interception — CJ Gardner-Johnson’s second of the night — on the Cowboys’ next drive and finished 18-of-38 with 181 yards and three picks in the loss.

Cowboys starting quarterback Dak Prescott, who has been sidelined since Week 1 with a thumb injury, told reporters after the game that he’s hoping to return for next Sunday’s matchup against Detroit.

Hurts went 15-for-25 with two touchdowns, zero interceptions and totaled 182 scrimmage yards. Philadelphia has now scored a total of 112 points in the second quarter in 2022, the most points by any team in any quarter in the first six games of a season in NFL history.

The Eagles improve to 6-0 and enter their bye week, while the Cowboys fall to 4-2. When Philadelphia returns, their next three games will be against the Steelers, Texans and Commanders, all of whom have a record below .500.

The Eagles have dominated second quarters this season, and that continued on Sunday. They scored 20 points in the second quarter against the Cowboys and have now outscored opponents 112-27 in the second quarters of games. The 112 points are the most by any team in NFL history through six games and more than the total points of 11 teams in the NFL. The Cowboys made it a three-point game in the second half, but could never take the lead. Eagles coach Nick Sirianni recently spoke with Hall of Fame coach Tony Dungy about playing with leads, noting that Dungy’s teams were 80-1 when holding a 14-point lead.