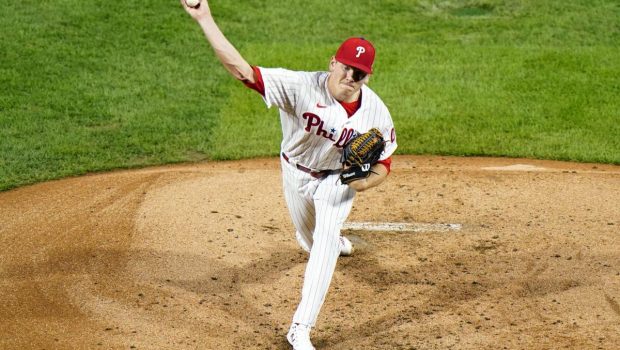 Spencer Howard is only 24, but the Phils right hander is already looking for a comeback!

He felt sharp pain in his right shoulder in 2020,his rookie season.

He struggled to go 1-2 with a 5.92 ERA in six starts before landing on the injured list.

“It wasn’t as sharp of a pain, like pinchy in my shoulder,” Howard explained on a Zoom call. “It was more of like, ‘Oh, I don’t have that much there anymore.’ Which was more concerning to me honestly, because it was like, well, am I just a bad pitcher now? Am I going to throw this slow forever? Is this, like, the new me?”

“It’s a feeling that I was searching for all last year,” he said. “It just wasn’t the same coming out. I’m happy with where I’m at right now.”

Howard will compete with Matt Moore, Chase Anderson and Vince Velasquez for the final two spots in the rotation.

“The word is not ‘concern’ for me,” Phillies pitching coach Caleb Cotham told MLB.com about Howard’s workload. “That’s not a word that I would use. I think it’s something that we really need to pay attention to the details. It’s how well are we accounting for all the things that aren’t even in the game? How well are we recovering? How well are we really taking ownership of our intensity in between starts, our work in between starts? The recovery modalities. These guys have really, really nice routines. So can we help them a little bit better to recover a little bit better so that there’s less cost every time? It’s how many different things can we surround the player with to help that?

“Now, obviously the workload and doing best by a Spencer Howard is really important. No, you can’t expect him to throw 200-250 innings, but I think it’s just the conversation of what’s best for him, almost checking in on it pretty consistently, almost daily in how it’s going to be a little quicker to make a pivot in a plan or something like that. But I wouldn’t use concern. It’s something that’s just going to be conversation daily for the whole year.”