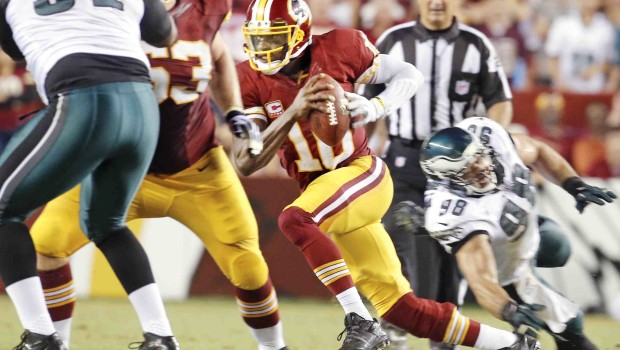 SHOULD EAGLES TAKE A CHANCE ON TATTERED AND TALENTED RG3?

So, it’s all but official.

Washington Redskins president Bruce Allen finally said publicly what has been a poorly kept secret for some time:

Quarterback Robert Griffin III will play elsewhere next season. And, Allen said, he’ll have his choice of teams to further his NFL career.

The question is whether or not the Eagles should take a bite on the QB, who had a great rookie year in 2012 but whose career has been decimated by injuries and misuse of his tall talent?

It’s not surprising that the Redskins would be moving on from Griffin, but it is the first time a team official has said he won’t be playing for Washington next season. Allen told the Dan Sileo Show on The Mighty 1090 in San Diego that Griffin would not be on the roster next season. Last month, general manager Scot McCloughan left open the remote possibility that Griffin could return, though even then team officials privately said the relationship was over.

“I see Robert getting an opportunity with another team,” Allen said. “We’ve heard from some teams that are interested. I think he’s going to have a choice of a couple teams that will let him excel in the future.”