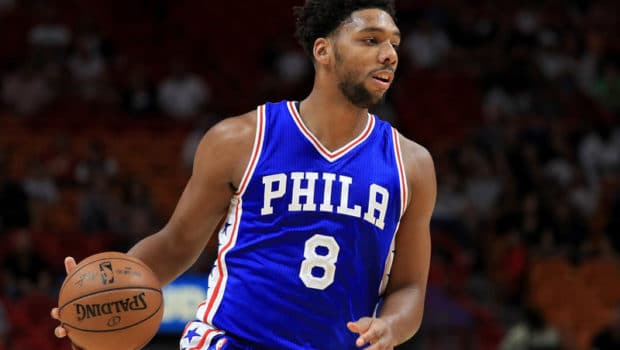 Sixer center Jahlil Okafor had 12 points and five boards in a season-high 24 minutes, the maximum he was allotted as he comes back from knee surgery.

The Sixers were behind the 8-ball last night in Charlotte.

It was a back-to-back game so super center Joel Embiid didn’t play as he comes back from foot surgery.

The team was playing on short rest, having endured a harsh two-point loss less than 24 hours earlier.

Coach Brett Brown had only available 11 players. The Hornets were mostly healthy and hadn’t played since Saturday.

But the Sixers fought and scrapped and held a 53-46 halftime lead.

Then, Charlotte flicked its switch, exploding for 63 points after intermission, en route to a 109-93 victory.

“We got jumped coming out of the locker room,” Brown said during his post-game media session.

The Hornets ripped off the first 13 points of the third quarter, a stretch during which the Sixers committed four of their 11 second-half turnovers.

Charlotte cranked out 39 points in the third period, sinking all but six of its 22 field goal attempts. Nicolas Batum generated 17 of his 20 points in the frame.

“Some of it’s you’re playing against a playoff team at home,” said Brown. “They come out and they tighten up and do what they did. We give them credit. Nicolas Batum is an elite player, made some very difficult shots.

“It is true, we got in foul trouble,” said Brown.

Subsequently, both Ersan Ilyasova, making his Sixers’ debut, and Dario Saric had to fill in at the five spot a bit.

“I thought Ersan was good,” Brown said. “For just walking into a breakfast room this morning, you can see why we were attracted to him. I think he’s going to be an excellent complement to what we have.”

The Sixers picked up Ilyasova Tuesday afternoon via a trade with Oklahoma City. Brown’s mission was to keep the floor assignments streamlined for the nine-year veteran.

“That’s the first thing is to keep his world clean as he walks into a new team in the first five, six hours,” Brown said before the game.

Going forward, the Sixers will steadily ask Ilyasova to digest more material, such as what to do in underneath out of bounds and end of game situations.

“Incrementally, you pick what’s most important that he’s got to learn as time unfolds,” Brown explained. “Slowly, you start going at the things that matter most. Initially, you put him out there, you put him in a simple situation, and try to put him in a position where he can succeed and invariably help the team.”

Despite receiving a crash course introduction to the team earlier in the afternoon, he finished with 14 points, sharing team-high scoring honors with Saric. In 24 minutes, Ilyasova also provided three rebounds and two assists.

“You have to be professional no matter what,” said Ilyasova.

“Obviously, the trade happened and everything kind of fell in one day. We have a good group of guys, and we play well as far as sharing the ball. They tried to help as far as being in the right place offensively. I think we have really good potential here, but we have to stick together no matter what.”

Jahlil Okafor contributed 12 points and five boards in a season-high 24 minutes, the maximum he was allotted. Holmes had a perfect shooting performance, adding 11 points (4-4 fg, 1-1 3fg, 2-2 ft) and three rebounds. Sergio Rodriguez netted 10 points (3-9 fg, 3-7 3fg), and is now the only Sixer to reach double-figures in each of the team’s four games.

Brett Brown Said:
On the Sixers’ defense –
“I think it’s just trying to pound the obvious areas that we are trying to look at. The rules remain the same, the level of accountability. There are adjustments you have to make with some of these great players that the NBA has. For our young guys to be able to make in-game reads on how we need to fix things is part of their evolution.”